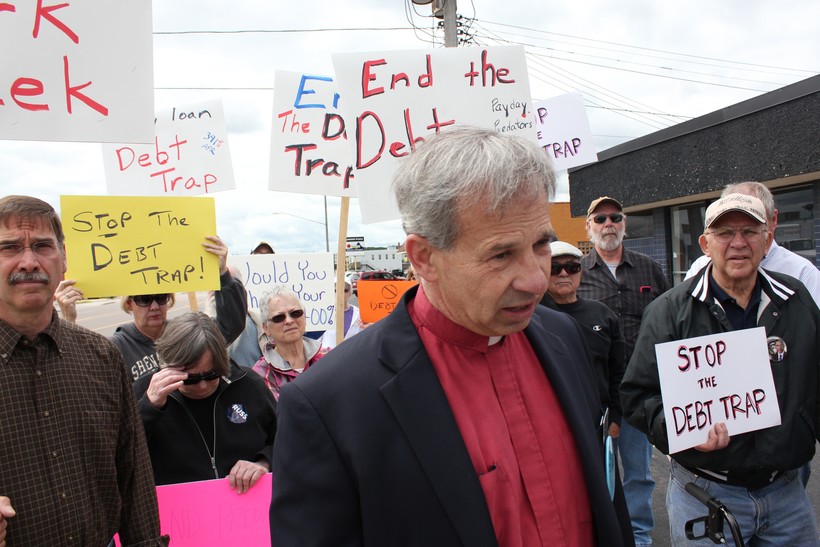 New Rules Would Restrict Over-Borrowing And Require Lenders To Ensure Borrowers Can Pay Back Loans
By Rich Kremer
Share:

Representatives from consumer advocacy groups Citizin Action Wisconsin, WISPIRG and Eau Claire-based JONAH held a rally to support a plan from the Consumer Financial Protection Bureau that would require lenders to verify borrowers can repay loans and restrict repeated borrowing. Peter Skopec of the advocacy group WISPIRG said the payday lending model preys on the poor.

"The rule that’s been proposed today by the Consumer Financial Protection Bureau gets at the heart of that business model and will make it harder for payday lenders and other predatory lenders to take advantage of people who can’t afford to pay them back," said Skopec.

Jeff Smith of Citizen Action Wisconsin said the new rules will protect citizens getting stuck in what some call debt-traps, where borrowers take out new payday loans to payoff older ones.

The Community Financial Services Association of America, a payday lending trade group blasted the proposed federal rules saying they will block access to credit for millions unable to get traditional loans.

From a statement released by the trade group:

"The CFPB's proposed rule presents a staggering blow to consumers as it will cut off access to credit for millions of Americans who use small-dollar loans to manage a budget shortfall or unexpected expense. It also sets a dangerous precedent for federal agencies crafting regulations impacting consumers."

The CFPB will take public comments on their proposed payday lending rules until Sept. 18.