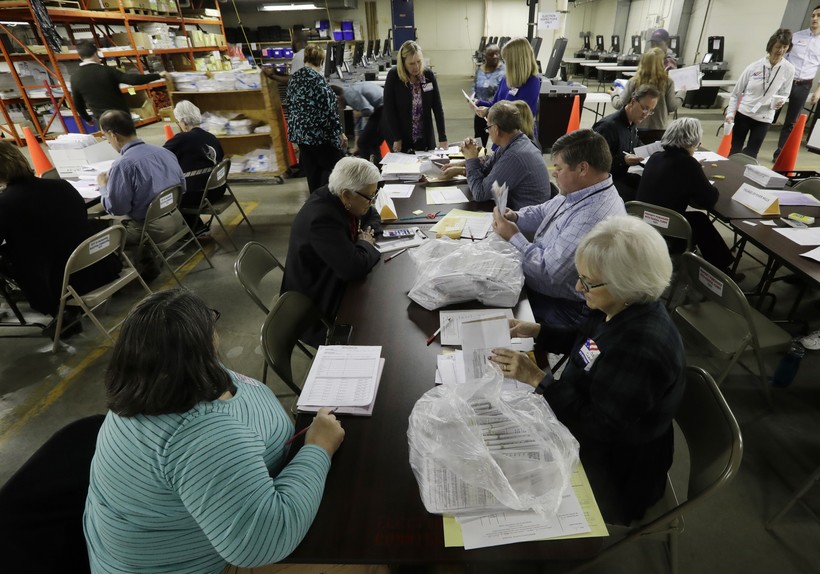 Trump Campaign Has Until Wednesday Evening To Request Recount
By Laurel White
Share:

Wisconsin election officials completed a statewide, county-level certification of election results Tuesday, opening up a roughly 24-hour window for a recount to be requested in the state — something President Donald Trump’s campaign has said it plans to do.

The county canvass of votes, a process mandated by state law for every election, does things like compare the number of voters in poll books to the number of ballots cast. During the canvass, election officials also check to make sure results printed manually from voting machines on election night match the results transferred over encrypted networks, review write-in candidate tally sheets and process provisional ballots. The county canvass follows a similar, municipal-level canvass.

All 72 county clerks had finished the canvass process and submitted their certified results as of Tuesday morning, according to the Wisconsin Elections Commission.

The canvass resulted in a net gain of 62 votes for President-elect Joe Biden, compared to unofficial election night results. The canvass shows Biden defeated Trump in Wisconsin by 20,608 votes.

Under state law, the Trump campaign has until 5 p.m. Wednesday to request a recount.

The president’s campaign manager, Bill Stepien, said on the day after Election Day the campaign planned to request a recount in Wisconsin "immediately."

A spokesperson for the campaign didn’t respond to a request for comment Tuesday.

Trump's campaign would have to pay for a recount to be carried out. The Wisconsin Elections Commission said Monday such a recount is estimated to cost $7.9 million, a large increase from the 2016 presidential recount price tag of $2 million. That's in part because of the COVID-19 pandemic. The full estimated cost is due at the time the recount is requested.

If a recount isn’t requested, officials will move forward with the certification process as normal. The next step would be an audit of ballots from 190 randomly selected reporting units across the state, aimed at verifying the machine count. That process is done every election.

After that, the Elections Commission is scheduled to meet on Dec. 1 to do the final, state-level certification of votes, which sets in motion the presidential electors process.

Though no evidence of voter fraud has surfaced in Wisconsin, Assembly Speaker Robin Vos, R-Rochester, called on the state Assembly elections committee to conduct an investigation of the election as well. The committee has yet to hold any hearings related to the investigation, but its actions wouldn’t have any bearing on the official certification of results.