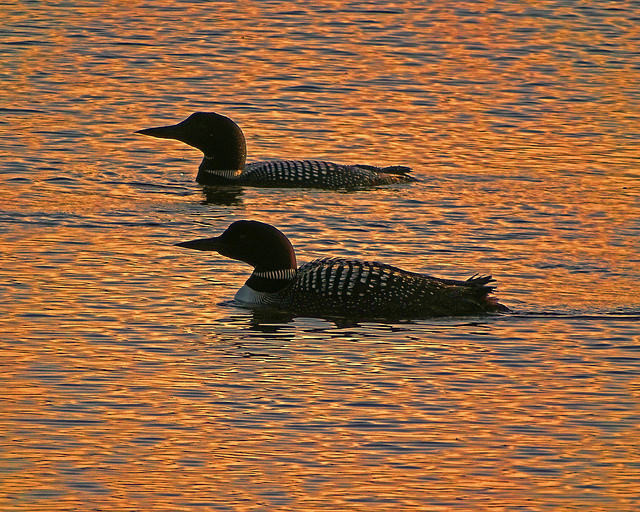 In the last few years, loons have appeared on lakes in the Eau Claire area in early April. They migrate from their winter home, primarily in states along the Gulf of Mexico to northern Wisconsin, Minnesota and Canada where they spend the summer.

Like other bird species, this years's colder and snowier spring in parts of Wisconsin is posing an extra set of challenges for loons, in this case because Eau Claire-area lakes are still frozen.

"They are backed up and they are hanging out and because they eat aquatic life they need to have the lakes open," explained Steve Betchkal, an ornithologist and president of the Gaylord Nelson Audubon Society, a wildlife conservation group in northwestern Wisconsin. "They can't move faster than the water opens up."

But this year's late thaw aside, Betchkal said the Audubon Society has some evidence that climate change is shifting migratory patterns in a more long-lasting way.

But he said climate change could have a negative impact on food for migrating birds.

"That's why birds migrate," Betchkal said. "They get here in time for the bug hatch. A bird that's coming from Uruguay like a cuckoo, if it gets here, and the bug hatch happened a week ago and they missed it, there's nothing for them to eat. Their favorite food is gone."

To get a better picture of how climate change is affecting birds in the state, the Wisconsin Society for Ornithology is working with bird-watchers to collect data for a Breeding Bird Atlas — the first to be compiled in two decades.

Birders have another year to share there observations said Jeanette Kelly, citizen science center director at the Beaver Creek Reserve in Fall Creek.

"We are surveying the whole state of Wisconsin to determine where birds are breeding," said Kelly. "When all of this information is compiled it's going to be very interesting to see how the breeding ranges have changed for birds over the past 20 years.

Kelly said the average person with an interest, but no experience in bird migration might invest in a phenology calendar which tracks wildlife and plant life cycles in Wisconsin.