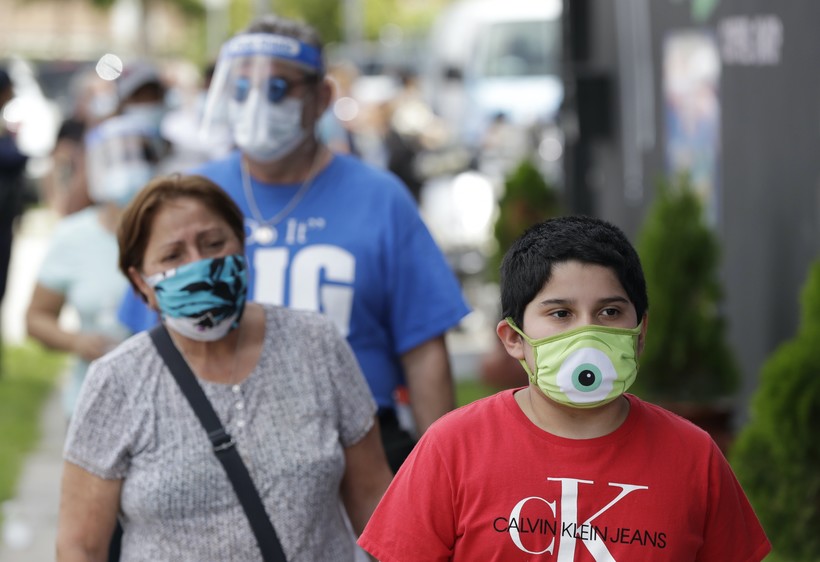 People, social distancing and wearing masks to prevent the spread of the new coronavirus, wait in line at a mask distribution event, Friday, June 26, 2020, in a COVID-19 hotspot of the Little Havana neighborhood of Miami. Wilfredo Lee/AP Photo

Heading Into Holiday Weekend, 5.7 Percent Of All Tests Are Positive
By WPR Staff
Share:

New reports of COVID-19 are holding steady in Wisconsin, based on the latest data published by the state Department of Health Services.

The latest figures bring the overall total of positive cases in Wisconsin to 30,317, according to the DHS. A total of 796 people in Wisconsin have died from COVID-19, with three new deaths reported on Friday.

According to DHS, 5.7 percent of all test results reported on Friday were positive for COVID-19, bringing the average percentage of positive tests over the past seven days to 5.3 percent. The seven-day average a week ago was 4.1 percent.

Wisconsin's daily testing capacity — based on the availability of test supplies and adequate staffing — has grown from 120 available lab tests in early March to 19,014 as of Friday. The number of actual tests reported on Friday was 10,186.