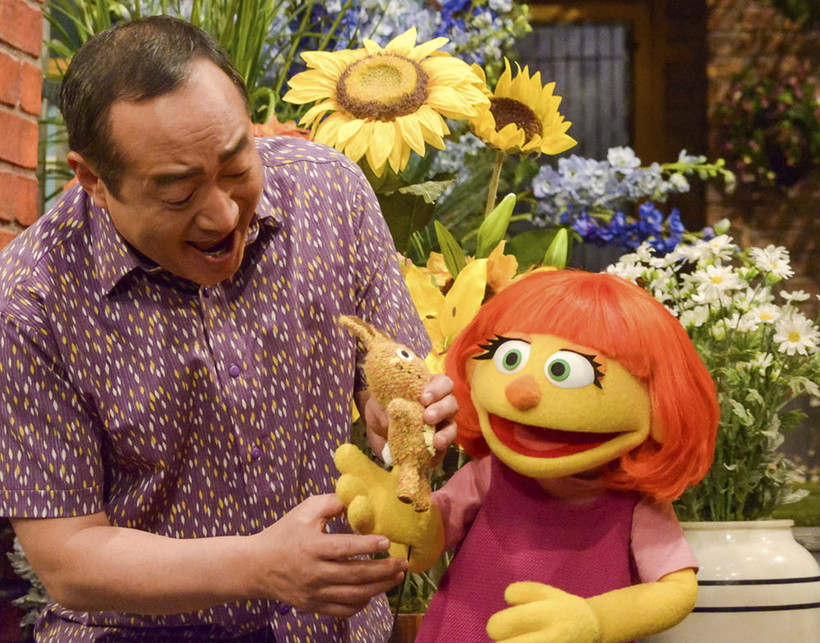 Julia, a new autistic Muppet debuting on the 47th Season of "Sesame Street," on Monday, April 10 on PBS and HBO. Zach Hyman/AP Photo

A Wisconsin autism advocate says she is "very excited" the children’s television show "Sesame Street" is introducing viewers to a new Muppet — Julia, a pre-schooler who is autistic.

Julia is a shy 4-year-old with red hair and green eyes who likes drawing and painting.

She enjoys playing with the other Muppets, who treat her like one of the gang rather than as an outcast. Her differences are explained along the way. For example, in the "Meet Julia" episode, Big Bird introduces himself to her, but she doesn’t respond right away, which makes him feel like she doesn’t like him.

"She does things just a little bit differently, in a Julia sort of way," Abby Cadabby, a fellow Muppet, tells Big Bird in the episode.

Julia also often repeats what other characters say and is the first Muppet with autism to be on the children's show, which stresses diversity and inclusivity.

"Having a character on 'Sesame Street,' which is such an iconic children’s show, is just another step forward in showing people with autism as part of a community and included in the neighborhood," said Emily Levine, executive director of the Autism Society of Southeastern Wisconsin.

According to the Centers for Disease Control and Prevention, 1 in 68 children in the United States is diagnosed with autism and is about four-and-a-half times more common in boys than girls. It’s often referred to as a spectrum disorder, meaning the symptoms and severity can vary from person to person.

The hallmarks of the disorder, Levine said, are differences in the way one communicates and interacts with other people, and the behaviors they exhibit. So, in the case of social greetings, the person with autism may have a delay in processing events around them, a lack of understanding of what’s expected when somebody says "hello" or be intently focused on something else.

Levine recalled a memory of walking her autistic son to school and being greeted by other children.

"By the time he said 'hello' 10 seconds later, they were half a block away, and I always wondered, 'What did those kids think?' 'Did they think he wasn’t wanting to be a friend?,'" she said.

Levine said she hopes children watching Julia on "Sesame Street" will learn it’s OK to be different, whether it be due to autism or another disability. She said children need to know that everyone is part of the same community and should be kind to each other.

However, Levine mentioned it’s not just children who can benefit from watching the program. Levine noted there’s an important lesson for parents as well.

"If their child has a classmate on the spectrum, that they consider inviting that child over for a play date or for a birthday party and not just dismissing that child as scary or not worthy of their attention," she said.

Julia is scheduled to appear in two episodes of "Sesame Street" this season and more the following season. She was first introduced as a character in Sesame Street's storybooks and online as part of the See Amazing in All Children initiative.