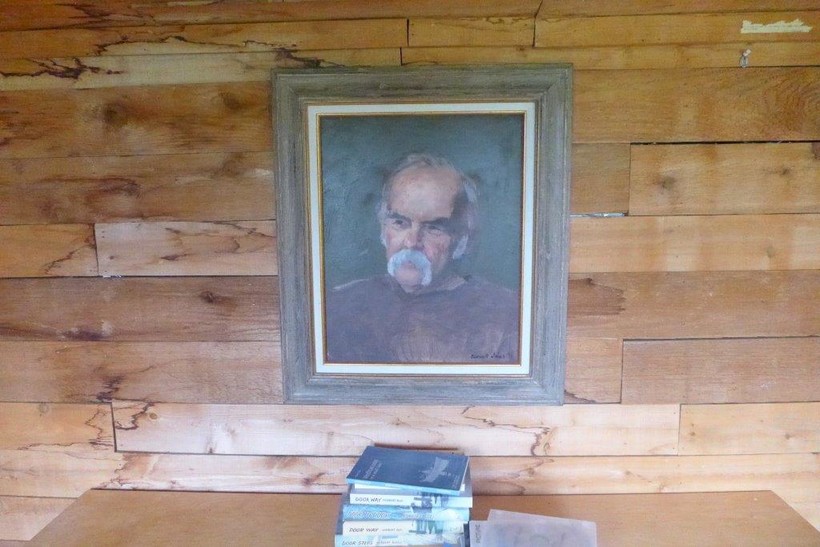 A painting of the author Norbert Blei hung in his chicken coop studio.

Chicken coops are part of the Wisconsin landscape and often house more than just chickens. A coop in Door County was once the studio of the late author Norbert Blei.

After his death, a nonprofit group moved the coop to a new home to save it from potentially being destroyed. It will now be a home for other authors who want a place to be inspired.

Jerod Santek is the executive director for Write on Door County, the nonprofit group that now owns the coop.

According to Santek, when Blei's home was sold last year, the coop was moved from Ellison Bay. It's now just off of Highway 42 in Fish Creek.

Blei wrote about Door County's environment and people. After moving from Chicago he became a permanent resident in the coop in 1979.

"So it's much larger than what you might expect from a chicken coop and it's a wonderful environment to work in," Santek said, while giving a tour of the space. "It's remarkably reduced from the amount of material than what was in here. The area where you're standing right now there were five four-drawer file cabinets but when Norb was working in the studio, there were just piles of books and papers and stuff."

Besides writing at least 18 books, Blei's work was published in the New Yorker and the Utne Reader. He was a frequent guest on Wisconsin Public Radio, and was recognized by the Wisconsin Academy of Sciences, Arts, and Letters.

And what happened to all that material?

"A lot of the writings and drafts of his books are going to the University of Wisconsin Library and some of the contents of the coop we still have here on the premises," Sentak explained.

He said Write On Door County has hosted about two dozen writers so far since it started in 2013. Blei died that same year.

Since Blei's work was so focused on "place," it was a concern to move the coop, but Santek said it will now have a new purpose for other authors, albeit in a different space.

"And we find this view is different definitely from Ellison Bay but it is a beautifully, inspiring view," Santek said. "One of the things we've been told is Norbert always wanted hollyhocks in Ellison Bay but couldn't have because of the woods surrounding it in front. So we have hollyhocks planted at the site of the coop. So it'll be somewhat different but it's keeping the same spirit alive."

Write On Door County is officially christening the coop this Saturday at a free event that will feature readings by some people who were featured in his works.

Santek said Blei may be gone, but he's not forgotten: "As it says on his grave marker, 'Find me in my books.'"