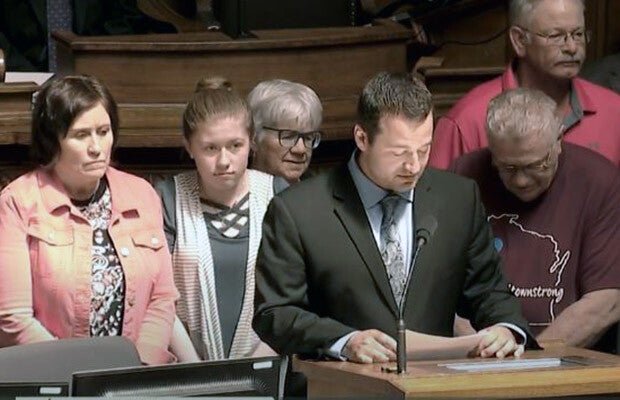 In this screenshot of a Wisconsin Assembly hearing Wednesday, May 15, 2019 streamed by WisconsinEye, Jayme Closs, second from left, can be seen with state Rep. Romaine Quinn, R-Barron, and her family.

Jayme Recognized For Strength, Bravery After Escaping Kidnapper Who Killed Her Parents
By Rich Kremer
Share:

The state Assembly is honoring Jayme Closs as a "hometown hero."

The Barron teenager stood next to family members in the Assembly chamber on Wednesday while state Rep. Romaine Quinn, R-Barron, spoke of the tragedy that hit his community Oct. 15, the day Jake Patterson shot the 13-year-old's parents and took Jayme to his home in Gordon in northwestern Wisconsin. Jayme was held captive for 88 days until she escaped Patterson’s home and found help from neighbors Jan. 10.

"Jayme, your strength, your resolve and your bravery is beyond incredible," Quinn said Wednesday. "You are truly an inspiration and a bright light during a time of sadness."

During the three months Jayme was missing, thousands of residents from Barron, surrounding communities and across the nation helped search for the girl. A so-called gathering of hope was held in Barron soon after her disappearance. Quinn said Jayme's escape has been a source of inspiration for all who followed the story.

"You taught us an important lesson," Quinn said. "No matter how grave your situation, no matter how dark your days become and no matter how impossible your circumstances may seem, there is always hope."

#FBI Milwaukee salutes Wisconsin teenager Jayme Closs today, surrounded by family and friends after being honored as a Hometown Hero before the WI State Assembly. Jayme was abducted from Barron County for 88 days before escaping her captor and found help. #JaymeClossStrong pic.twitter.com/guoNDZrBcr

Jayme didn't speak during the presentation, but Jennifer Smith, Jayme's aunt, spoke on the family’s behalf and said Jayme was enjoying her day at the state Capitol and the kindness shown by lawmakers and staff. Smith pointed to the hometown hero award not only as a recognition of Jayme, but also of all of the support shown by the community.

"I'd first like to recognize the hometown part of this hometown hero award," Smith said. "Our hometown, Barron, and the surrounding area needs to be recognized for their support, encouragement and their love. Thank you so much."

Smith finished her remarks by highlighting the determination shown by Jayme as she endured months of captivity in the wake of her parents.

"Her courage, her bravery and her spirit are things that inspire us and make us stronger and better," said Smith. "Just like you, we want Jayme to know how much we love her. Thank you."

Jake Patterson pleaded guilty March 27 to two counts of first-degree intentional homicide and one count of kidnapping. He is scheduled to be sentenced May 24.