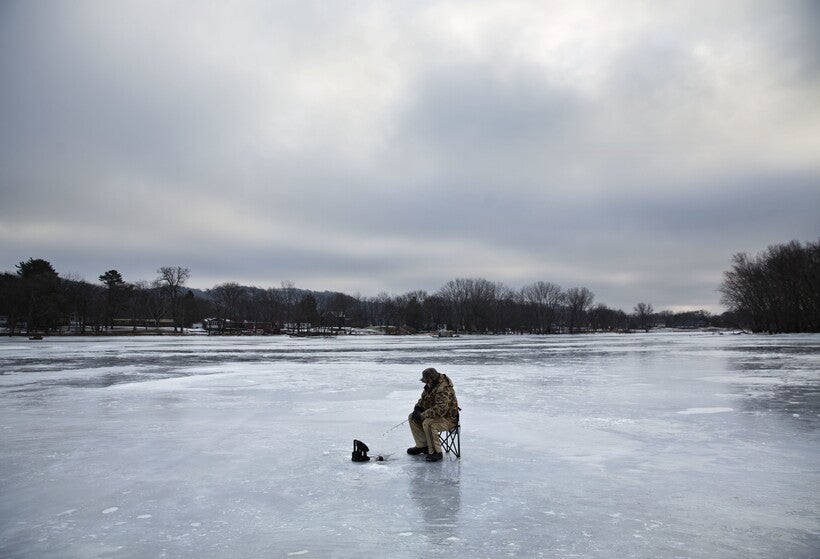 Wisconsin Anglers Return To The Ice As Temperatures Drop

The return of cold temperatures in Wisconsin has brought a resurgence of ice fishing across the state.

Ice breaks and open water have kept some anglers from their usual fishing areas this season.

"The cold weather this week is just going to get us out to more fishable areas, especially on the Winnebago system," Berg said Friday. "(Lake) Poygan is finally drivable for a few people. The main lake of Winnebago was not even safe for ATVs prior to this week."

Berg said anglers should keep in mind that the ice is thinner than it normally is at this time of year. He said anyone venturing onto the ice for the first time should avoid cracks and bring along an ice chisel or "spud bar" to test the ice before walking on it.

Wisconsin members of the U.S. Coast Guard who patrol Green Bay and other ice fishing locations along Lake Michigan are working without pay as the federal government shutdown continues. But Berg said any changes in their operations shouldn't impact area anglers.

"We spend a lot of time checking the ice to make sure it's safe for our customers and the other people out there," Berg said. "(The Coast Guard) never had a real big presence. You didn’t see them at the boat launches or anything like that. So I guess it was kind of 'out of sight, out of mind' the same way it is now."

Some anglers on the western side of the state feel the same way about having fewer U.S. Fish and Wildlife Service employees patrolling the national wildlife and fish refuge that encompasses the Mississippi River.

"It really doesn't have an impact on anything we do out here as far as fishing," said Chad Knapmiller, owner of Schafer’s River Rentals, a boat rental and bait shop on Lake Onalaska.

Like northeastern Wisconsin, Knapmiller said anglers along the Mississippi River have seen more ice breaks than usual this season.

"We got unusually cold weather to start the season out with, which made some good ice right away. But then we warmed back up and with that warm up, it's brought some unusual things with how the ice has formed," Knapmiller said.

He said areas on the ice that are usually strong enough to support vehicle traffic have been broken up this winter, forcing anglers to use a more creative approach to access popular fishing locations.

"They’re walking across an island to get out by the (La Crosse Airport) instead of walking the ice like they normally do," Knapmiller said.

As temperatures dip, Knapmiller said he’s seen an influx of first-time anglers coming into his store. He said anyone new to ice fishing should stop into their local bait shop to ask about ice conditions before venturing out.