A scene from American Players Theatre's staged reading of "Are You Now Or Have You Ever Been..." The play was recorded using the Zoom video conferencing platform.

In March of 1953, poet and activist Langston Hughes testified in front of the Senate Permanent-Sub-Committee on Investigations on Un-American Activities. Hughes’ testimony in front of that committee, chaired by the Wisconsin senator Joseph McCarthy, was only made public in 2003 -- fifty years after it took place.

This episode in Hughes’ life is the focus of playwright Carlyle Brown’s piece titled "Are You Now Or Have You Ever Been…" It is one of the plays that American Players Theatre in Spring Green, Wisconsin, chose for a staged reading that was recorded over Zoom.

The committee had subpoenaed people from many walks of life, but the American creative class was under particular scrutiny. And Brown was very aware of that in writing the play.

"All I know is that I wanted to write a play that worked like a poem," Brown said. "And then I wanted creativity to be a character.'

Gavin Lawrence is an actor, director, playwright and composer. He has been a part of American Players Theatre in Spring Green since 2016, joining as a member of the core acting company in 2019. He portrays Hughes in the APT reading, and has had a long history with the writer. He played the role when the play debuted in 2012, but his connection goes back even further than that.

"When I was a young boy, my mother, who was a literature professor at Howard University, would have me recite Langston Hughes poems. So he's been in my blood for a very long time," Lawrence shared.

Playwright Brown also referred to the place that Hughes holds in a lineage that runs through African-American literature, "which maybe African-American writers might look at in a different way than other people do," he said. "You got to know about people like him intimately, and study their writing."

The first portion of the play depicts Hughes at home the night before he is due to testify, both trying to work on a poem, and preparing himself mentally and emotionally for the committee meeting. During this part of the play, he often speaks directly to his readers, which in the case of the play, is the audience. And in the second part, Hughes shares the stage — or screen — with members of the committee. That has a very different feel because of it being a recorded Zoom video call instead of a stage.

"Our director, David Daniel, did a really great job of juxtaposing my physical image on screen with the words and lyrics of a lot of Langston Hughes' poems, which, as Carlisle wrote in the stage directions, is vital to how he wanted this piece to be produced," Lawrence said. "And then when we get the other guys from the McCarthy committee, Dirksen and Cohn and Schine, that seeing these guys in these different squares actually made the audience feel as though they were watching a hearing. So I think it really worked well on this platform."

Daniel, an actor himself, shared the challenges of staging a play in which many of the characters are some of the most reviled people in U.S. history.

"One thing we kept reminding ourselves is that we didn't want any cartoon villains," Daniel said. "Because it would have been easy for all of us to just kind of slide into that."

When APT decided to stage "Are You Now Or Have You Ever Been…," they could not have anticipated the racially charged moment in history that we are living in. Lawrence sees this play as an opportunity to advance the conversation about the complicated racial history of the United States.

"Most Americans don't know about Langston Hughes, I think, like they should," Lawrence said. "And so to get a chance to trace his life, to trace his feelings about art and literature, and fiction particularly, and then to get to see how he's kind of like raked over the coals for being an artist, I think is very ironic, and symbolic of what we're dealing with now."

PBS Wisconsin recorded all six plays in APT’s Out of the Woods series. "Are You Now Or Have You Ever Been …" is available starting at 7:00 p.m. on July 10. It and the other plays in the series will be available to stream for free on PBS Wisconsin's website until July 26.

A Play Depicts Attacks On Langston Hughes For His Political Beliefs 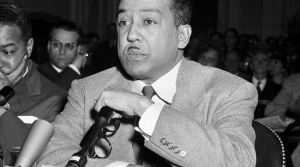 Poet and activist Langston Hughes was one of many people victimized by Wisconsin Senator Joseph McCarthy's witch hunt against communists. A Wisconsin theater company prepares to virtually perform a play based on those events. We talk with the actor who plays Hughes.