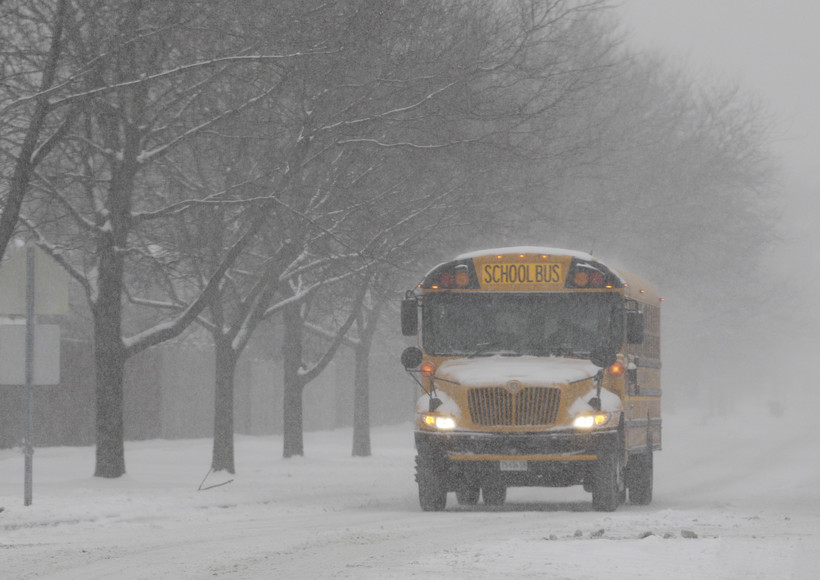 Storm Moving Across Midwest Toward New England
By WPR Staff and The Associated Press
Share:

A winter storm system is sweeping across the Midwest before heading to New England, bringing snow and strong winds.

The National Weather Service has winter storm warnings in effect from the Dakotas, across the Great Lakes states and into New England. The storm started Friday, bringing snow to South Dakota and leading to deteriorating road conditions in Iowa. Freezing drizzle is slicking roads in Nebraska.

Weather service officials have issued winter storm warnings and winter weather advisories for later Friday and into Saturday in parts of Wisconsin. Snow will spread across most of the area late Friday afternoon and evening, and diminish over south-central Wisconsin by Saturday morning. Periods of snow showers will continue in the east, closer to Lake Michigan.

Meteorologist Nicole Batzek, of the National Weather Service in La Crosse, said the storm should move fast across the state Friday.

"We're seeing snowfall rates between 1 and 2 inches an hour across some locations. That moving over a location in one, two, three  hours... that adds up," Batzek said.

In some areas, the snow fall comes at the height of the evening commute.

Most of the storm should wrap up before sunrise Saturday, with cold air expected in its wake. But intensifying winds could mean blowing or drifting snow and cold temperatures are expected for the weekend and early next week.

Forecasters said it will be cold Sunday with highs struggling to get into the teens, with below-zero wind chills in the morning and again at night.

Most of the larger accumulations appear to be coming to southern Wisconsin. According to projections around noon Friday, Madison might receive 4 to 6 inches while Milwaukee might see 5 to 8 inches. Kenosha and Racine could get 6 to 9 inches.

The storm is expected to bring between up to 10 inches of snow to other parts of the Midwest before walloping the Northeast with up to 2 feet of snow Sunday. Chicago is forecast to receive as much as 8 inches by Saturday and New York City is expected to see up to 6 inches.

Snow begins this afternoon across the area. Higher totals have expanded a bit further north toward the I-94 corridor. pic.twitter.com/Ki14hNj4Qo

Wind gusts in the Chicago area are expected to reach 35 mph.

Bitterly cold air is expected in the storm's aftermath.