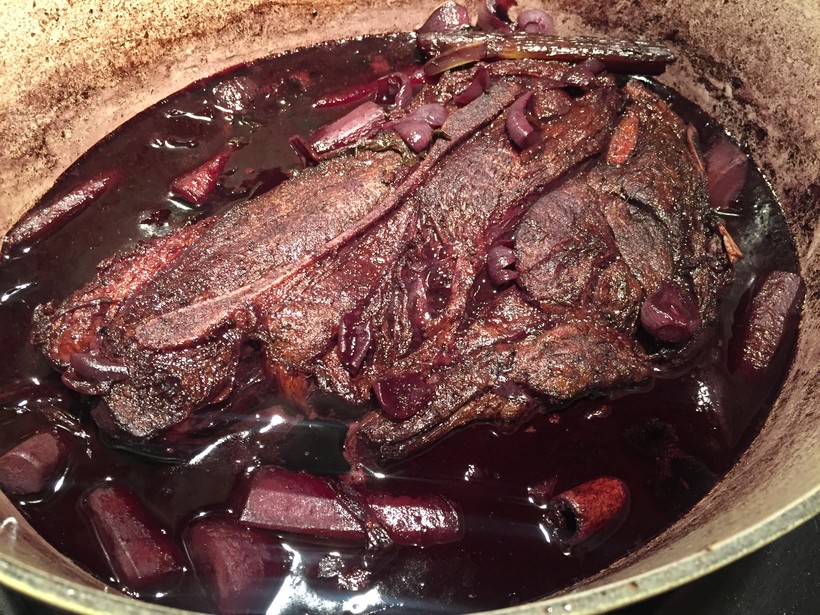 Braised rosé veal is a delicious and hearty dish to enjoy in the winter. Photo: Inga Witscher.

Winter On The Farm Leaves Time For Friends, Food

Winter holidays, whether spent at home in a big city or out on the farm, are a great time to connect with family and friends. According to Inga Witscher, those celebrations are even better over food.

Witscher, along with her husband Joe Maurer, produces "Around The Farm Table" on Wisconsin Public Television. She said that the work on their small, organic dairy farm near Osseo, Wis., never really stops, but it does take on a different pace in the winter.

One thing that Witscher said she particularly enjoys in the winter is that she and her husband dry their cows up for a couple of months, which means no milking.

“It is the way to farm. I’m telling you. Because then in spring when the calves are coming, you’re excited to milk cows again,” she said.

Drying up cows involves working with their natural lactation cycle, Witscher said, which is at a low point now since calving season is in the spring. In addition, they are fed lower quality hay, which also lowers the milk output. Simply not milking them is the last key element.

Witscher is hoping for a quiet end to the year, with not much traveling and meals shared at home. One dish she is looking forward to making is her smoked trout canapés.

They are a favorite for Witscher because she sees them as “a little bit special,” and “they’re fun, they’re easy, and they make me feel like a sophisticated woman,” she said.

Witscher also likes this recipe because there are two local Wisconsin purveyors of smoked trout from which to get the main ingredient. One is the Bullfrog Fish Farm in Menomonie, and the other is Rushing Waters Fisheries in Palmyra.

For a special main dish, Witscher likes to prepare a braised rosé veal roast, especially since they raise their own veal calves on the farm. “Rosé” indicates a calf that is raised until it is about 14 months old, which is slightly older than other veal calves.

Witscher prefers the rosé veal because she finds that it has more flavor, but isn’t as strong a taste as beef. Because it's a slightly tougher cut of meat, she said that the slower low temperature cooking method is perfect.

“Then, you can cut it with your fork,” she said.

For Witscher, it is the addition of the warming spices like cinnamon and cloves that make the roast so perfect for the holidays.

“It gives it that special flavor, and it smells so delightful when you’re cooking it,” she said.