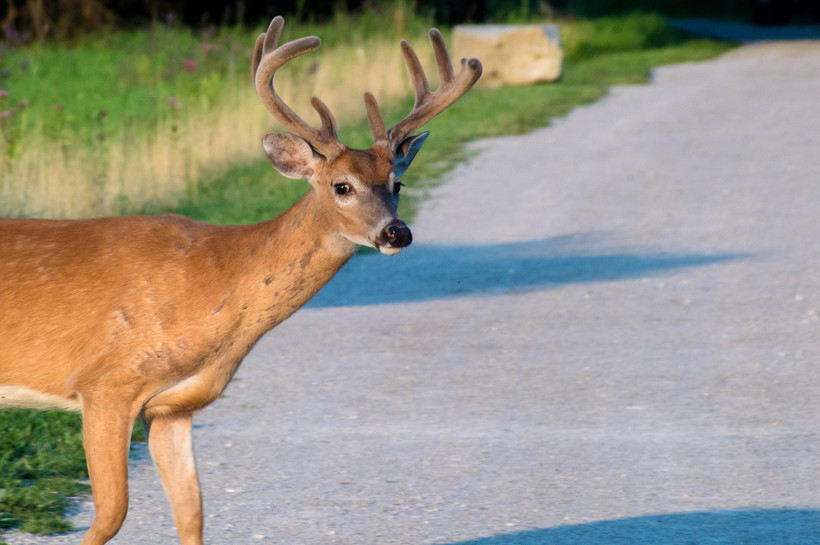 'Willy-Nilly' Bucks On The Prowl For Mates Aren't As Cautious

Drivers Urged To Be Even More Vigilant During Breeding Season
By Elizabeth Dohms
Share:

Those bright yellow signs that clue drivers into areas of high deer traffic are placed there strategically.

As Kevin Wallenfang, a big game ecologist at the Wisconsin Department of Natural Resources, explains, they're meant to inform drivers that deer cover, such as woodland or wetlands, is close by, making them prime areas for accidents to occur.

But in the next few weeks, during the deer's rut or breeding season, bucks throw caution to the wind in search for does. Drivers must be extra alert, keeping close watch in all areas, not just deer crossings.

"The bottom line is for the next few weeks ... the bucks are running willy-nilly around the landscape looking for receptive does," said Scott Craven, an University of Wisconsin-Extension wildlife ecologist.

According to the state Department of Transportation, vehicle-deer crashes peak during October and November. Not surprisingly, counties with higher deer populations and more traffic tend to have more crashes, said Rob Miller, a DOT spokesman.

Nine people were killed and more than 600 injured last year in deer crashes across the state, according to DOT data. Dane County saw 962 deer crashes in 2017, the highest of all Wisconsin counties. Iron and Menominee counties saw the least, with 10 crashes per county.

"It's an unfortunate thing but it's part of life in Wisconsin," Craven said.

Craven provided a few tips for drivers to stay safe during these next few weeks when deer are especially active: 1. Don't swerve to avoid a deer. Craven said if the driver can't apply the brakes to avoid hitting the deer, it's best to hit it head-on. That's a better alternative to swerving either off the road or into another lane of traffic, where there's potential to hit another vehicle.

Swerving can also confuse a deer about where to run.

However, motorcyclists should slow down, brake and swerve to avoid hitting the deer, the DOT advises.

While some states have adopted control measures such as sensors and flashing lights as mechanisms to alert drivers to potential deer crossings, Craven said such installations aren't necessarily viable. That's because the crashes are more of a problem with motorists who disregard high-risk areas or higher deer mobility during certain times of the day.

"I don't believe there's any substitute for real astute, defensive driving at this time of year," Craven said.

2. Watch where it's coming from. Craven said it's a good idea to pay attention to where the deer was before it jetted out onto the road. There's a chance there are more deer coming from the same direction.

3. If you hit and kill a deer, consider moving it off of the roadside. Without endangering yourself, Craven said, drivers who kill a deer can move it into the ditch and off of the side of the road as a way to protect other animals such as eagles who might feed on them. Some people keep boxes of latex gloves or a shovel in their trunk to make the process safer and easier.

Craven said that more often carcasses are not being removed from the road, which could be a response to lack of funding to accomplish it. Moving the carcasses into the ditch assures the safety of the scavengers feeding on it, he said.

Miller said the DOT works with private vendors or counties to remove deer carcasses on state highways. He said vendors are required to remove the deer along all numbered highways within two business days of receiving reports of them.

If a deer is found dead along interstates, U.S. and state highways, drivers should contact the county's sheriff office.

Dead deer along county highways should be reported to the county highway departments; and local municipalities should be contacted for deer found on town, village and city roads, Miller said.