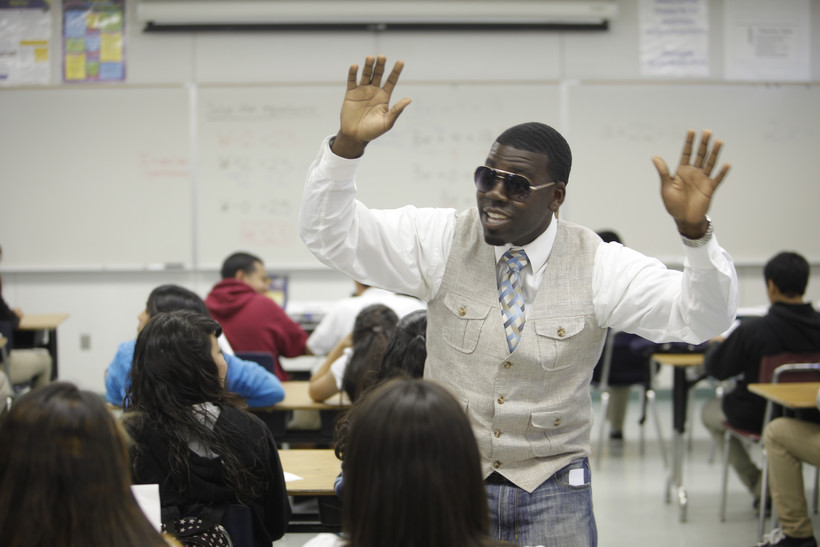 Algebra teacher LaMar Queen wears his rap glasses as he sings along to his Algebra students at the Los Angeles Academy in Los Angeles. The Los Angeles Unified School District teacher has won two awards for his innovative teaching method, by creating rap songs out of math concepts. Damian Dovargan/AP Photo

Educator Christopher Emdin has unhappy memories of being a young black student taught by a black male teacher who didn't see value in him as a person. Now, he sees his experiences persists among students he's interviewed and worked with.

"Just recruiting black men alone will not solve our problem," said Emdin, author of "For White Folk Who Teach in the Hood ... and the Rest of Y'all Too: Reality Pedagogy and Urban Education."

Despite the fact only 2 percent of the nation's teachers are black men, Emdin disputes the theory recruiting black male teachers will make good students out of young boys of color.

"If that teacher is not prepared to be able to teach me effectively, if that teacher is employing tools that a white teacher may employ who does not know the right thing to do, or if that teacher is following policies that don't meet my needs, their black face alone is not going to offer a solution," said Emdin, who is also the creator of the #HipHopEd social media movement.

Engaging young people in a way that makes them want to learn may appear to be a complex question, but Emdin believes there's a simple answer.

"Any time that you can convince a young person that they have the natural ability to be academically successful by being who they are, you'll have them have a different relationship to schooling."

The real work, Emdin believes, is around building self-confidence and self-affirmation. It's about helping students believe they can be both black and smart, that they can be cool and also intellectual, Edmin said.