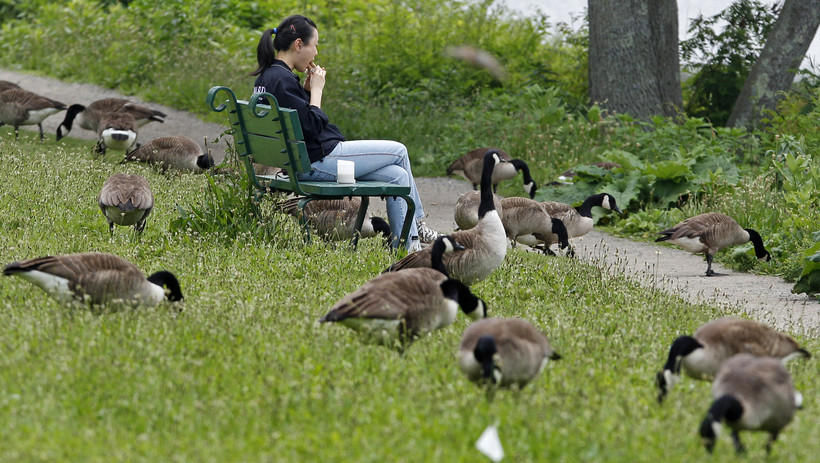 Practice Has Been Controversial Since It Was Introduced In 1999
By Mary Kate McCoy
Share:

Earlier this summer, Madison began its annual practice of culling — selectively reducing the population — Canadian geese to fight overpopulation, and it’s far from the only community to do so.

About 30 to 40 communities around the state participate each year, according to the U.S. Department of Agriculture’s Animal and Plant Health Inspection Service. Last year, over 2,500 Canadian geese were culled in Wisconsin, according to state records. In 2016, the population stood at over 129,000, compared to just over 11,000 in 1986.

The practice has been controversial since it started on a national scale in 1999.

David Drake, a professor of forest and wildlife ecology at the University of Wisconsin-Madison and UW-Extension wildlife specialist, says that while he acknowledges the concern about the practice, it’s necessary. And lethal methods are far from the first attempt at controlling the population.

"Nobody is interested in eliminating all the resident Canadian geese on the landscape, that's never the goal," he said. "The goal is simply to try to get that population back in check or back in balance with the environment."

Municipalities must get approval from the U.S. Fish and Wildlife Service, which also sets the number of Canadian geese each city is allowed to take lethal action against.

After the geese are collected by trained wildlife biologists, typically from the USDA, they are either taken to a meat processing plant or euthanized by carbon dioxide, Drake said, which is an approved method by the American Veterinary Medical Association.

"It's considered humane euthanasia and I know people who do not agree with this would perhaps consider that kind of an oxymoron," he said. "But according to the American Medical Association, that euthanasia method for Canada geese has been deemed humane and the animals do not suffer as they are euthanized."

Critics, like the Alliance for Animals, call the practice inhumane, and are encouraging the public to contact their officials to look for alternative solutions to the practice — which typically takes place over a 30-day period in May and June when the birds molt their feathers and are unable to fly, making them easier to round up.

"These are geese that stay in an urbanized landscape year round because of all of the resources available in urban landscapes ... if that's available year round, they have no incentive to expend energy and fly north during the summer to breed and then come back down south in the wintertime," he said.

And that’s why there’s an overabundance of Canadian geese in urban areas, he said, because we’ve created an ideal environment for them. And we introduced them to it.

With the overpopulation of the geese came a host of other environmental and safety issues, he said. Geese can be aggressive, which can lead to injuries if they charge, they can overgraze, which can increase erosion on water banks and their feces can pollute fields and waterways, he said.

"Some of those issues are relatively minor, and perhaps trivial, depending on who you are and how you look at things," he said. "What becomes a serious issue however, is as you get geese around airports."

The plane crash over the Hudson River in 2009 was caused by a Canadian goose getting stuck in an engine and effectively shutting it down.

"There’s a lot of non-lethal management that takes place prior to actually getting into the cull," he said. "It's one of the tools in a toolbox, but it's used as a last resort in that toolbox."

Those methods include embracing a native prairie landscape — geese don’t like tall grass because they can’t see beyond it and it impedes flying — harassment of the geese and oiling the eggs with corn oil, which clogs the pores of the egg and kills the embryo.

But part of the issue with non-lethal management is you often don’t actually solve the problem, you just move it someplace else, Drake said.

Essentially, it comes down to learning to coexist with the Canada geese — and other wildlife animals in a city, he said.