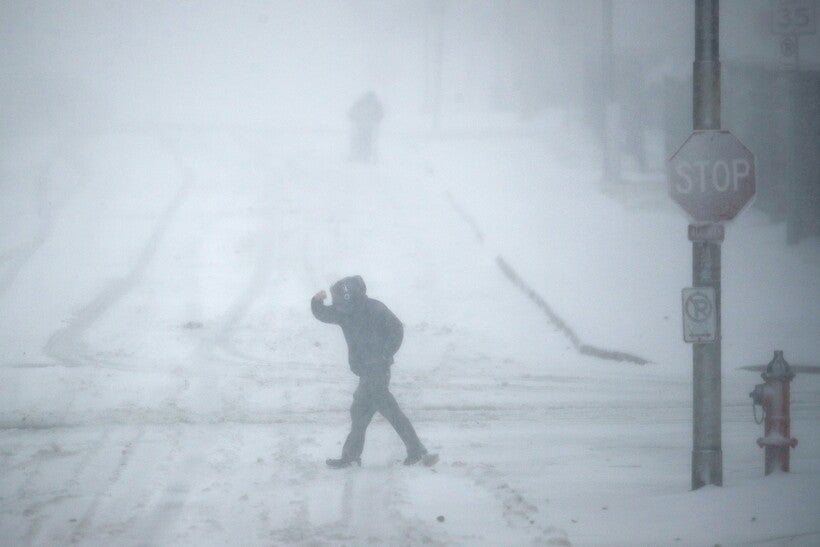 A widespread winter storm that’s moving northward from the southern high plains of New Mexico and northwestern Texas could dump up to 15 inches of snow across northern Minnesota and Wisconsin.

The heaviest snowfall is expected across northeastern Minnesota and the North Shore of Lake Superior. However, northwestern Wisconsin could also see 1 foot of snow by the end of the day Friday, said meteorologist Geoff Grochocinski with the National Weather Service office in Duluth.

"The areas hardest hit appear to be from Douglas to Bayfield counties, so the city of Superior up into Bayfield," he said.

A low pressure system in the southern United States is making its way toward the Midwest with snow beginning Wednesday night and diminishing throughout Friday.

"It’s drawing up a lot of moisture from the Gulf of Mexico and sending it northward into the Great Lakes region (and) Upper Midwest," said Grochocinski. "It’s going to have a lot of moisture to work with to produce snow as it moves through."

Most of the snow is expected to taper off early Friday, but the storm may linger longer near Lake Superior in northern Wisconsin.

"There will be some colder north winds crossing over Lake Superior so you will get some additional moisture," Grochocinski said.

In addition to heavy snow, the storm is expected to bring a mix of rain and snow for periods of time across northern Wisconsin and east-central Minnesota.

"Not expecting too much in the way of freezing rain where the rain immediately freezes on contact with surfaces like roads, but there could be a little of that mixed in as well," he said. "So, (it will be) a little bit more messy in northern Wisconsin."

High northern winds may reduce visibilities for travelers with gusts of up to 25 mph or more as the snow diminishes Thursday night into Friday. Grochocinski said people should consider changing their holiday travel plans as conditions deteriorate.

"This is a prolonged storm that’s going to cause widespread difficulties in travel across the region," he said. "Thursday will be particularly bad."

Xcel Energy has about 200 crews on standby to restore power in the event of an outage across the region, said company spokeswoman Chris Ouellette.

"This is a holiday week, so it makes it a little bit trickier. But, we've been able to make sure because we've had a couple days warning," she said.

Ouelette said about 16,000 of the 220,000 customers they serve statewide live in Bayfield, Ashland and Washburn counties.

"Snow typically doesn't cause a lot of outages, but if we do get the freezing rain and wind, that can cause more outages than just a snowfall would," she said.

She encouraged customers to report any outages they may experience Wednesday night through Friday.

The end of the storm will bring colder temperatures with wind chills in the single digits and highs falling from the lower 30s Thursday in northern Wisconsin to the upper teens Friday.