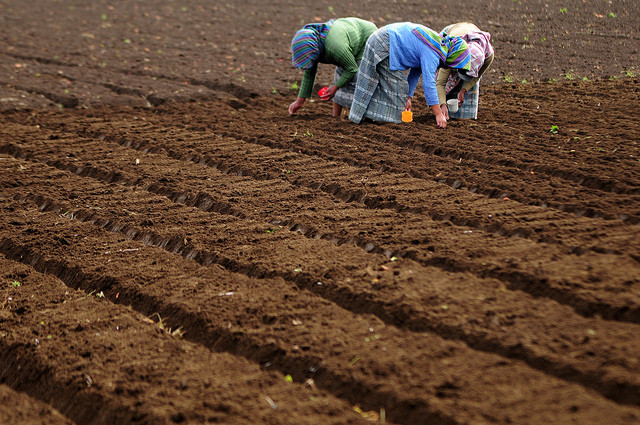 Vanderbilt University Ted Fischer says that in Guatemala, a strong sense of dignity is attached to farming, which can promote happiness and wellbeing. Photo: Maria Fleischmann / World Bank (CC-BY-NC-SA).

Why One Scholar Says Happiness Isn't A Personal Responsibility

Expert: Contrary To What Self-Help Lit Has To Say, Social Structures Might Be Biggest Factor In Determining Well-Being
By Galen Druke
Share:

Happiness is often treated like an individual responsibility. Self-help guides say happiness is attainable by exercising more, finding a hobby, living in the present, or through self-acceptance — and by telling people that, the industry makes about $10 billion a year.

But, not everyone agrees that happiness or well-being is in the hands of the individual. Ted Fisher, professor of anthropology at Vanderbilt University, said he believes that it’s actually more of a societal state of being.

According to Fischer, happiness is tied up in aspirations, morals, dignity and a sense of purpose. In order to feel those things, the right social structures have to be in place, he said.

“I think it’s something inherent to human nature that we aspire to something more,” said Fischer. “We need structures that allow us the opportunities to realize those kinds of aspirations. If we don’t have those kinds of structure in place, we get really frustrated.”

Sense of dignity can often be associated with the job or profession a person has, which Fischer says has a strong connection to the way jobs are framed socially. He points to farmers in Guatemala who see working the land as a virtuous act, and bike mechanics in Germany who go through rigorous training for their jobs — both examples of how all kinds of work can be connected to a sense of dignity.

Fisher said that kind of dignity can be lacking the U.S.

“We’ve seen lots of economic inequality over the last decades,” said Fischer. “It’s become in some ways an economy of ‘haves’ and ‘have nots,’ and I fear that at the bottom end of that spectrum we have a lot of jobs with less dignity than we used to.”

Fischer points to high-tech companies as being successful in making their employees feel that the work they do has broad applications and is improving the world — something he says all people want to feel.

Ultimately, when it comes to money, Fischer subscribes to some pretty conventional wisdom: It doesn’t necessarily buy happiness.

“We would all like to make more money, but if we pin all of our hopes to things like that, I think it's ultimately disappointing,” said Fischer.