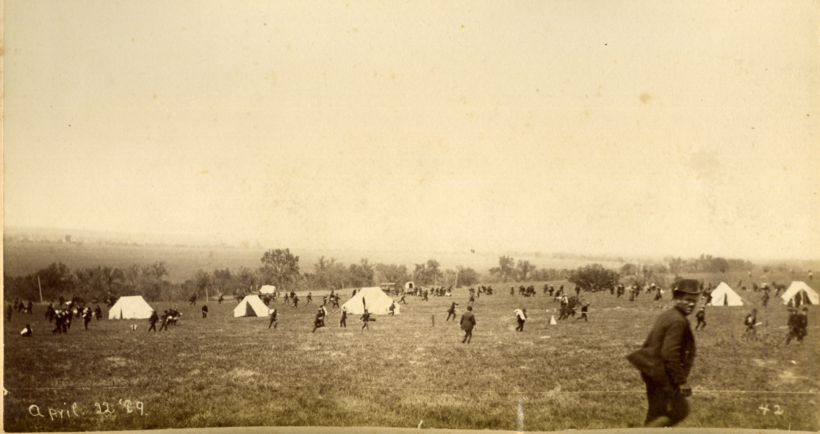 Why Oklahoma City Is One Of World's Weirdest Cities

Did you know that Oklahoma City is one of the great weirdo cities of the world? At least that’s what Sam Anderson says. He says that Oklahoma City is as strange as Venice or Dubai or Versailles or Pyongyang. And that it's worth paying attention to, regardless of what's going on in the news.

Anderson, a staff writer for The New York Times Magazine, spent five years writing the book, "Boom Town: The Fantastical Saga of Oklahoma City, Its Chaotic Founding, Its Apocalyptic Weather, Its Purloined Basketball Team, and the Dream of Becoming a World-Class Metropolis."

Anderson told WPR's "BETA" that the arrival of the Oklahoma City Thunder NBA team in 2008 had a dramatic impact on civic self-esteem.

"It (Oklahoma City) was just kind of a place you would never think to go for any reason. And even the people who lived there weren't necessarily happy being there. And so for them to go from that to one of 30 cities in North America to have an NBA franchise was a huge leap and something that they took great, great, great pride in," Anderson said. "And so the Thunder became this kind of symbol of the city's spirit and people would gather in the arena to cheer them on. And they were really cheering on Oklahoma City, this improbable story of this abandoned place that suddenly felt like the center of the world."

Born Out Of Chaos — The Land Run

"This was the story that when I read it, I kept doing a double take," Anderson said. "I could not believe that this was actual American history that I was reading and I couldn't believe that I hadn't heard much about it really."

Anderson continued: "So you had this spot in the middle of Indian Territory suddenly very late in the history of the United States when everything else was settled that was suddenly wide open and belonged to nobody. And they called it the 'Unassigned Lands.' The settlers of all the states around it said, 'What are you doing with that land? We want it.' And the government said, 'No, you can't have it, we don't know what we're doing with it.' And so the settlers started invading it and trying to found cities there. And eventually, Congress said, 'Fine, we give up. You can have it. And here's how we're going to do it. It's something called 'The Land Run.'"

"They allowed anyone who wanted land inside of this territory to line up around the border of it, which was 300 miles long — around 100,000 people came. People came from all over the world, from Europe — and they lined up on this border and at noon on April 22nd, 1889, troops fired off cannons and guns and things. And everybody ran. Some people had racehorses and some people had wagons and some people were on foot. And they went into this huge territory, it was about half the size of Connecticut, and they were allowed to stake claims. They found the land they wanted and they put stakes down and they fought each other off. And so Oklahoma City was one of the most attractive spots in that territory. And it went from zero people to 10,000 people in a matter of hours."

Over six months in 1964, a controversial experiment known as "Operation Bongo II" took place in Oklahoma City. More than 1,200 sonic booms were created over the city. The purpose of "Operation Bongo" was to quantify the effects that transcontinental supersonic transport (SST) aircraft would have on a city and to measure the effects that sonic booms would have on buildings and the public.

"They start launching these jets, they're going obscene speeds, and out of nowhere the people of Oklahoma City are hearing these cracking, thunderous blasts. And their houses are shaking. And there are these hilarious lists of all the damage being done in the city. People's dishes are falling out of cupboards and cracking. Somebody told me that his father remembered as a kid, a fish bowl exploding because of a particularly strong sonic boom."

Wayne Coyne is the front man of the alternative psychedelic rock band The Flaming Lips. Coyne grew up in Oklahoma City and continues to call it home.

"He lives today in the same neighborhood that he grew up in, which is a kind of run-down area of the city — not particularly glamorous. It's become kind of cool because Wayne Coyne is there and you see him around doing his weird art projects and things," Anderson said.

Anderson even had the opportunity to participate in one of Coyne's experimental art projects.

"We were out one night and he just casually mentioned, 'Hey, I was thinking about, you know, how like streets are really boring and they're all the same color. Well, I was thinking that maybe like we could paint a giant rainbow all over the streets in Oklahoma City. Wouldn't that be cool?' And I said, 'Sure, Wayne, that would be cool.'"

"He already had the paint. He had a plan in mind. So at some point I ended up at this house party with him. And it was four in the morning and finally he said, 'All right. It's time.' And he grabbed six of us and we all went down to his house. We took these six cans of paint, the colors of the rainbow, and we lined up on the street. And we poked holes in the bottom of them and we just walked around his whole neighborhood dripping these lines for blocks and blocks and blocks and blocks that made this giant rainbow all over the streets of his neighborhood."