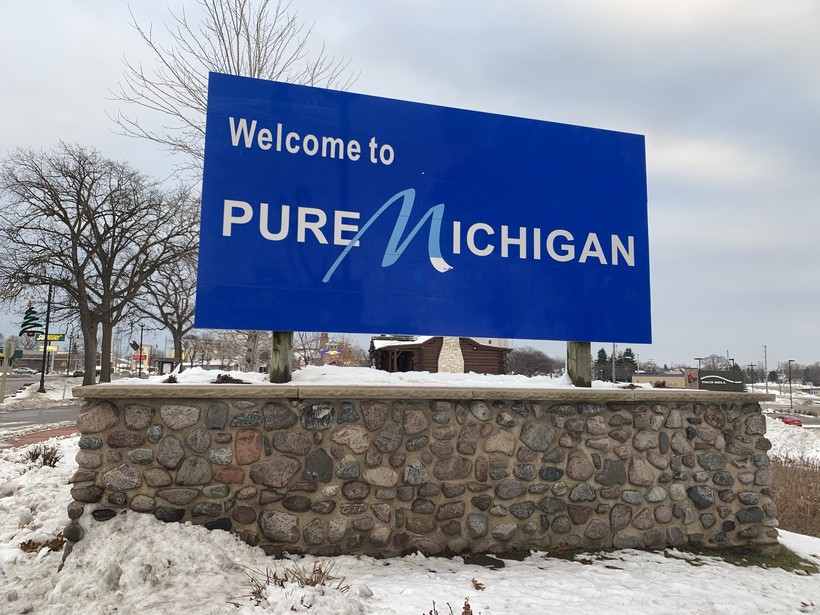 Sign at the border of Marinette, Wis. and Menominee, Mich. Laura Pavin/WPR

Why Isn't The UP Part Of Wisconsin?

A Fight Over 500 Square Miles Could Have Handed The Upper Peninsula To Wisconsin. Does That Matter?
By Laura Pavin
Share:

Michiganders likely weren’t too happy when the Wisconsin Badgers beat several of its football teams last year; its Upper Peninsula, however, took it in stride — at least it’s unofficial Twitter account did.

"It’s official, I belong to Wisconsin now," the Tweet read, after rattling off the scores. The account even changed its name to the "Upper Peninsula of Wisconsin."

What’s the deal? Geographically, the UP is only connected to the Lower Peninsula by a bridge. With Wisconsin, it shares more than 200 miles of border.

So why isn’t the UP part of Wisconsin?

It's a question on many people's minds. It's also WHYsconsin’s most-asked question.

But this isn’t a story about a bloody battle where Michigan reigned supreme. Digging into the technicalities of how this chunk of land joined Michigan rather than Wisconsin shows the former state’s claim over it had more to do with timing than anything else. The bigger question might be whether the UP and Wisconsin should have been joined. And does a state’s identity rely on its physical connection?

How DID The UP Become Michigan’s?

In the late eighteenth century, the United States acquired the land that would later become Illinois, Indiana, Michigan, Ohio and Wisconsin, and adopted the Northwest Ordinance of 1787, laying out how new states could be admitted into the Union. Areas became territories, and territories started to become states.

Unfortunately, some of the boundaries weren’t well-defined, causing the state of Ohio and the territory of Michigan to fight over a less than 500-square-mile piece of land called the Toledo Strip that encompassed modern-day Toledo and Maumee Bay on Lake Erie. 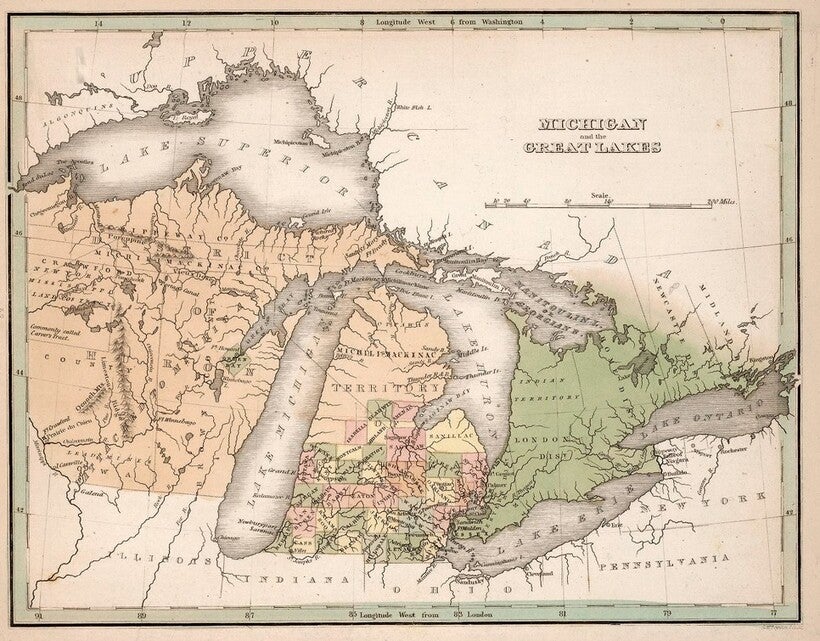 This 1838 map shows Michigan Territory before it became a state. Modern-day Toledo, OH and the mouth of the Maumee River are shown as part of this territory. Photo courtesy of Mary Antoine.

They fought over the land until Congress stepped in and proposed a compromise: Michigan could become a state if it gave this strip of land up to Ohio. In return, it would get all of the Upper Peninsula. At the time, Michigan territory included part of the eastern portion of the UP. The compromise would give it statehood if it took the western portion, as well.

Robert Myers, director of education for the Historical Society of Michigan, said it came down to power politics. Michigan’s status as a territory meant it didn’t have as much power as Ohio, which had already become a state.

"President (Andrew) Jackson needed Ohio’s electoral votes. It was a presidential election, and so he needed Ohio to be happy," he said.

Ideally, Congress hoped the UP compromise would make Michigan happy, too. But it didn’t.

"They said, 'No, we want the Toledo Strip. The Upper Peninsula doesn’t have anything but ice and rock and trees. And we don’t want that,'" Myers said.

That changed in late 1836, Myers said, when Congress determined it had a federal surplus in the U.S. Treasury, and that every state could have a cut. Every state.

Michigan needed that cut. It had spent a lot of money paying the militia to patrol the Michigan-Ohio border. It accepted Congress’ original offer and became a state in 1837.

Wisconsin had only just become a territory the year before. It was never in the running for the UP.

"If Michigan had won out over Ohio and gotten its desire, which was to have that Toledo Strip, then would Michigan have cared, really, if all of the Upper Peninsula had been taken away?" he mused.

This is unclear. But the UP has since felt a disconnect between itself and its lower half. Throughout its history, Yoopers have floated the idea of becoming the United States’ 51st state, called "Superior."

With this tension in mind, would it have made more sense for the UP and Wisconsin to be one? Is shared geography crucial to a state’s sense of identity? WHYsconsin drove to the border towns of Marinette, Wisconsin and Menominee, Michigan to learn a little more about the similarities between Wisconsin and the UP, and found they have a few, integral things in common.

Most of the Menominee residents we talked to said they rooted for the Green Bay Packers over the Detroit Lions. Menominee local Steve Crane, who we caught up with at Lolli’s Pub in Marinette, took it a step further.

Appleton reporter Shane Nyman, who grew up in the UP’s Marquette County, said that sentiment spreads across the peninsula.

"From my experience, the UP is close to a 50-50 mix, as far as Packers and Lions fans go," Nyman said in an email. "I grew up in the central part of the state, and Packers fans outnumbered Lions fans." 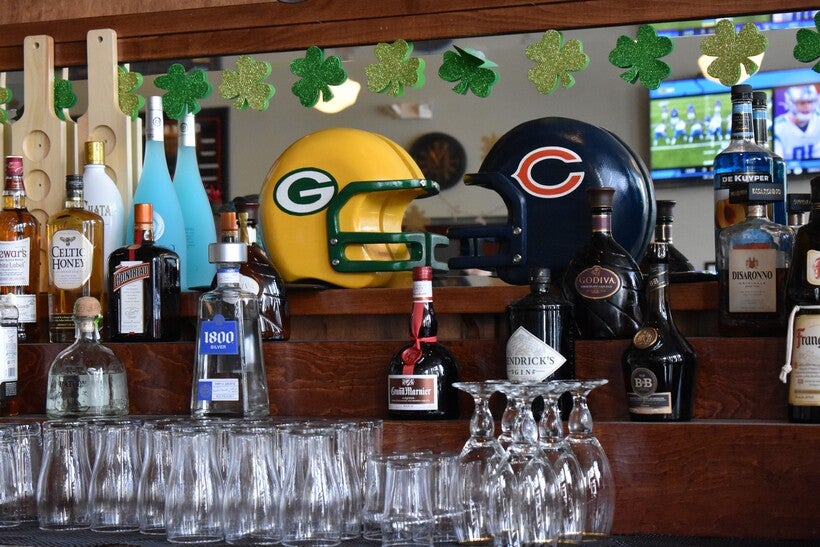 You would be hard-pressed to find an official survey that confirms this. But a quick web search will turn up articles that generally agree with Nyman’s guesstimate, with some saying the mix is more like 90 percent Packers fans and 5 percent Lions fans (the remainder is allegedly made up of Vikings, Bears or Cowboys fans).

Nyman suspects part of the reason more Yoopers — the name for those living in the UP — root for Green Bay is due to distance: Green Bay is closer to just about anywhere in the UP than Detroit is. And if you’re comparing the respective successes of the Packers and the Lions, it’s easier to be a Packers fan.

There’s also the availability of the games on TV.

Joanna Camps, a bartender at Murray’s Irish Pub in Menominee, said when the Packers play, no other games are on local broadcast — not even the Lions.

"Lions fans have to come here to get it on Direct TV," Camps said. "The Packers take priority here."

Eavesdrop on a conversation on either side of the border and you’ll notice some similarities in the way people sound.

Longtime Menominee resident Michael Henes said that "yah," "don’t ya know" and "you betchya" can often be heard around the UP. 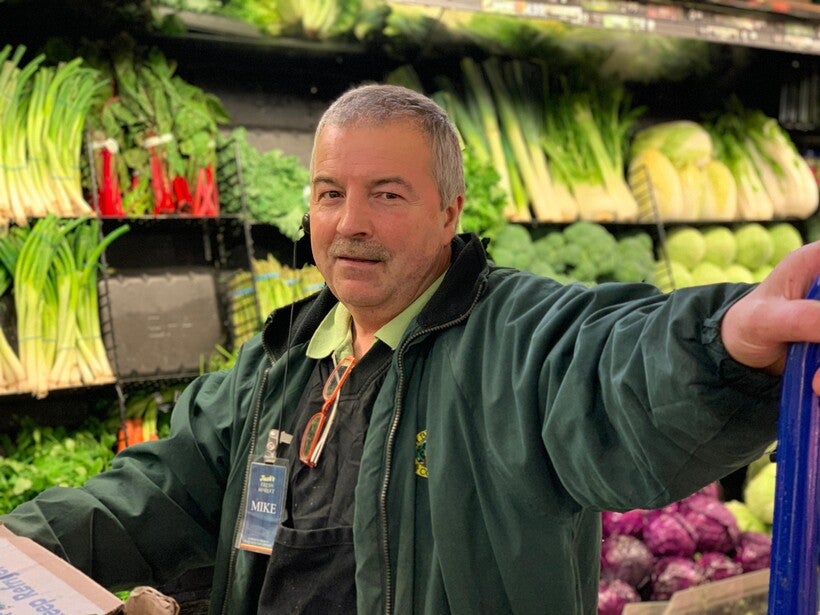 Longtime Menominee, Mich. resident Michael Henes is lead produce manager at Jack's Fresh Market in the city. He says people have conflated the UP accent with a Canadian one. Laura Pavin/WPR

"A lot of people thought my brothers were from Canada when they moved down to Kansas City," Henes said.

This should sound pretty similar to the classic Wisconsin accent.

Linguistics experts say accents from the two localities share key features, like the long "o." People from the areas also tend to say "dem," "dere" and "dose" instead of "them," "there" and "those." And some Yoopers and Wisconsinites deploy something called Canadian raising in their speech. That means saying words like "about" and "out" like "uh-BOOT" and "OOT."

It also turns out the accents found in the UP and Wisconsin are more similar than those found in Michigan’s Lower Peninsula.

Joseph Salmons, director of the University of Wisconsin-Madison’s Center for the Study of Upper Midwestern Cultures, chalks these similarities up to a number of factors.

"The UP and northern Wisconsin have Finnish speakers, a lot of demographic similarities, and similar economic patterns — like mining and lumbering," Salmons said.

Kathryn Remlinger, a professor of English at Grand Valley State University in Michigan and author of "Yooper Talk: Dialect as Identity in Michigan’s Upper Peninsula," said the geographic distance between the UP and the Lower Peninsula has kept their respective accents distinct from one another — at least, distinct in their own minds. This perceptual distinction matters because language is our badge of identity.

"It’s a reflection of who we are, where we grew up, where we work, and who our peers are," Remlinger said.

What is the UP’s identity anyway?

Durable is one way to put it.

"There’s a Finnish word, 'sisu,' which means the ability to endure," said Jim "Hoolie" DeCaire, owner of Da Yoopers Tourist Trap in Ishpeming, a city in the north-central part of the peninsula. He’s also a member of Da Yoopers, a traveling comedy musical group that specializes in self-deprecating hyperbole about life in the UP.

Winters aren’t for the faint-hearted, he said. Shoveling — nay, conquering — the snow is something everyone has to do. So is co-existing with mosquitos.

"They’re big," Hoolie said. "Three or four of them could carry off your dog."

Above all else, Hoolie said, Yoopers are "proud, tough and independent." And they feel a kinship with Wisconsin.

"We always say, 'The capital of Yoop-sconsin is Green Bay," he joked.

The Yoopers and Wisconsinites we talked to both suggested their physical closeness created a feeling of closeness. The UP and northern Wisconsin also share cultural similarities, like an appreciation for deer hunting, fish frys, and a love of outdoor recreation. They also face similar struggles, like regional tensions over environmental regulations and a reliance on a tourism industry that’s vulnerable to economic headwinds. 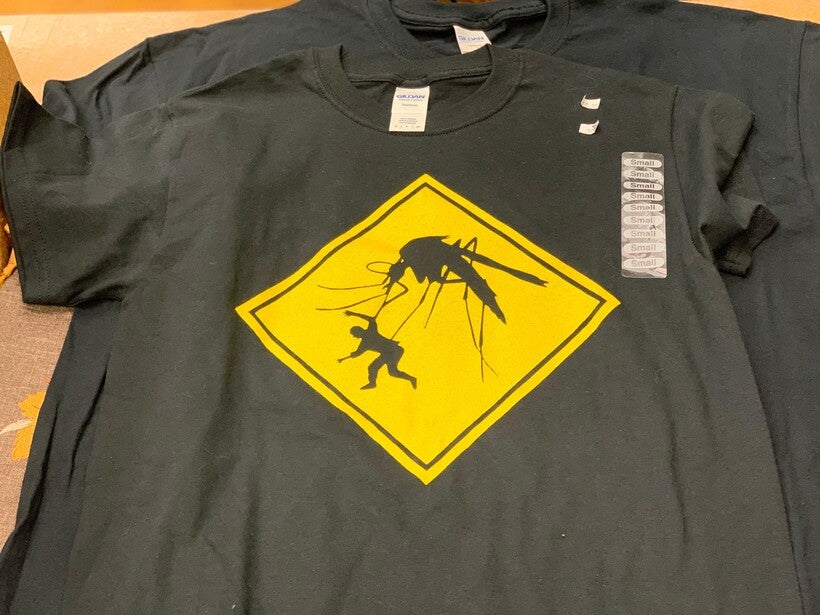 A T-shirt for sale at Jack's Fresh Market in Menominee, Mich. Laura Pavin/WPR

That’s not to say the Lower Peninsula doesn’t share any of this with the people up north. It’s just a little more disconnected.

As we jumped back and forth between Marinette and Menominee, several people asked us some version of this question: "You know what Yoopers call people in the Lower Peninsula?"

The answer, they said, was "trolls," because lower Michiganders live below the Mackinac Bridge. It speaks to a feeling that’s been bubbling under the surface for decades.

The person who runs the unofficial Upper Peninsula Twitter account — a long-time Yooper who wished to remain anonymous — traces it back to the war over the Toledo Strip.

"We were a consolation prize (for Michigan’s loss over the Toledo Strip). So we have this chip on our shoulder because we were an afterthought," they said.

Maps are one tangible pain point.

In August, Mountain Dew came out with a campaign called "DEWnighted States" that included a map combining Wisconsin and the UP. A couple of months later, Saturday Night Live’s Weekend Update showed a map with no trace of the peninsula. One UP company compiled an entire list of cartographic infractions on its website.

Do you need to be physically connected — by more than just a bridge — to feel like you’re truly part of the same state?

"In Wisconsin itself, there is an east (and a) west," said Mary Antoine, a historian who works at the Prairie du Chien Historical Society in southwest Wisconsin. "Living here in the southwest corner of Wisconsin, we feel that the whole eastern side of the state doesn’t even know that we exist ... that the Wisconsin economy is totally focused on the greater Madison area and the Lake Michigan area from Chicago to Green Bay."

Culturally and geographically, Wisconsin and the UP look like they belong together. But continuous landmass or not, distance alone, can cause divides.

That’s something every state has to grapple with, including Wisconsin.