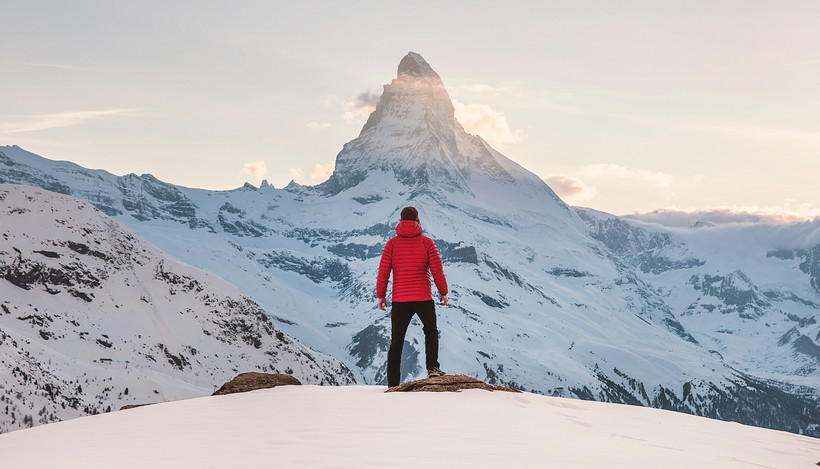 Why Climbers Push To The Brink Of Death

Why do some people risk their lives in pursuit of the ultimate adventure? It's a question that has obsessed David Roberts for decades.

For years he climbed some of Alaska’s biggest mountains, and made a number of first ascents. Later, he became one of America’s best known adventure writers and wrote several classic mountaineering books, including "The Mountain of My Fear" and "Deborah: A Wilderness Narrative." He’s often called the "dean" of American climbing literature, and has mentored a number of other writers, including Jon Krakauer.

His new book, "Limits of the Known," is a kind of summing up. It's an examination of why some climbers feel compelled to push the edge of what's possible. It's also a reflection on facing death, which is all the more poignant because Roberts, now in his mid-70s, has stage 4 throat cancer. Roberts told "To The Best of Our Knowledge" host Steve Paulson that there’s no thrill quite like venturing into the unknown.

Steve Paulson: You said there was one time when one of your expeditions you were off for 52 days totally cut off from the outside world — I mean this is before the days of GPS and satellite phones and all of that.

David Roberts: One thing I do is I ask people: "How long have you ever gone without contact with the outside world?" No radio, no phone, no mail, no internet. It's rare when somebody said three days. So I would proudly say, "Well, I did it for 52 days once in Alaska, and it felt wonderful" but then I think of Fridtjof Nansen and I think, well, what's that compared to three years?

SP: And of course the other side of this is that if you get into serious trouble, no one is going to come and rescue you.

DR: I think part of why that felt so good was that by cutting ourselves off from a radio, before smartphones, we became totally reliant on ourselves. If we got in trouble, that actually ends up giving you a wonderful psychological boon because you don't have those worries about "Well, will they come and save me?" No. It's "Will we save ourselves?"

SP: Why did you do this? Obviously you were doing things that were incredibly risky. I mean you were putting your life at risk.

DR: Well the whole book is an attempt to explain that. In particular you have to reckon with the idea that adventure is pretty selfish. For the most part, it doesn't do other people much good. You can't simply weigh your own feelings, you can't say that the joys outweigh the sorrows.

I think you have to take into consideration the people who are waiting at home, and who will be devastated if you don't come back. Believe it or not, it took me about 25 years to see that.

SP: You were just so obsessed with wanting to do this yourself — that came before how anyone else was going to deal with your possible death.

DR: Yeah. I started climbing long before I got married, and yet I married young, at 24. After I married Sharon, I realized that she worried about me every time I went off, and that actually undercut that wonderful self-sufficient, self-reliant feeling I had because then I would worry about her worrying about me.

SP: So why did you do that? Why take those risks?

DR: We climbers, we adventurers, really did want to escape the rat race, the petty pace from day to day. And get away from it all. Get to a place where things really mattered, where the decisions you made had huge impact and consequences.

SP: So the danger is a big part of why you do it.

SP: Now we should say that you have also experienced tragedy. Early on, on one of your Alaska expeditions on Mount Huntington, one of your friends fell and died.

DR: That was in some ways the best climb of our lives — up to then, certainly. We made the first ascent of the west face of Mount Huntington in Alaska, which we'd like to think was the hardest climb that had been done by that date — 1965 — in Alaska. It took 30-some days before we finally broke through all the obstacles and got to the summit. And then less than 12 hours later, we were descending, Ed Burns and I. The other two guys stayed up in the higher camp, and Ed and I went down in what was then the end of July. It started to get close to dark around midnight.

We set up of a rappel and something happened. Ed rappelled first, and the whole thing came loose. He simply fell, right in front of my eyes, without a word. Disappeared into the void. And I was alone. (I) never did figure out exactly what happened. And then I had to somehow get — without a rope — down to the next camp, where I waited two and a half days for the other two guys to come. It was the most intense, extreme, and upsetting experience of my life.

SP: I can't imagine those two and a half days. Just being alone without ... How did you deal with that whole experience?

DR: I think I'm still dealing with it. I think I actually got a kind of PTSD from it — though nobody called it PTSD back then. But it also spurred me to write, and in fact I had such an urge to tell the story of our expedition beyond just the journal articles we wrote up the next spring that I decided I should write a book about it.

I'd never even tried to write a book. But I was under such a cathartic drive that I wrote "The Mountain Of My Fear" in nine days.

SP: You were wrote a whole book in nine days? Wow! Talk about compulsion. I mean maybe dealing with Ed's death — I presume — was a big part of that.

DR: Well, that was the only book I've ever written under that kind of cathartic momentum.

SP: Did you feel guilty at all about what happened to your friend?

DR: Oh God yes. Especially because Ed was the youngest member. A month after the expedition was over, I went back to Philadelphia to try to explain the whole thing to his parents, who were utterly, utterly devastated and who didn't have any grasp of climbing. I spent a long, horrible weekend — in my self-righteous 22-year-old way — trying to explain why Ed died doing this glorious thing, and it just didn't make any sense to them. They tried to find out why this was part of God's plan.

I stayed in touch with them for another 15 years, and 15 years later the grief was as sharp as it had been the week they heard that their son was gone. That certainly brought home the guilt in a lasting way.

SP: You are now in your mid-70s and your life has taken another dramatic turn: You have stage 4 throat cancer. I assume this has dramatically changed what you are able to do physically.

DR: Yeah, it's curtailed everything that I used to take for granted. I can barely hike five miles now, and I can't carry a heavy back. It's a terrible loss.

SP: Well the other thing too is that you've spent your life dealing with the possibility of dying. And here, death is staring you in the face. And I guess I'm wondering if all those years of climbing prepared you in any way for what you're now dealing with.

DR: You know, I wish I could say yes, but I can't. I don't think it did. That kind of facing death is so different from facing death by cancer. One of the things I've sort of railed against was this horrible metaphor of the "battle against cancer." You know, Susan Sontag wrote about this brilliantly, to an illness as metaphor. Every time you read the obituary of someone who died it's always "after a long and courageous battle with lung cancer," or throat cancer. It's not a battle. It doesn't matter what you want to do, or what you try to do. How tough you are doesn't matter. There was nothing heroic about it.

SP: Are you the kind of person who ponders the big existential questions? 'Why are we here?' 'Do our lives have meaning?' Or 'What's going to happen after I die?'

DR: I'm a complete atheist and I don't believe in life after death. I don't believe that that kind of existential question is worth pondering. But I do very much care about why we do what we do and it does it matter — what's the point of it all. I think for atheists the idea that you might leave something enduring behind — in my case, my books — has a kind of superstitious appeal.

Once you're dead, forget it. Doesn't matter if your name's forgotten, nobody reads your books. But I can't say that. I sure hope somebody is still reading them 50 years from now.