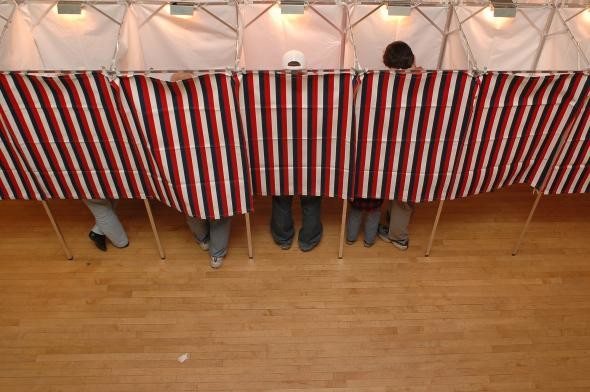 Why Are So Few Millennials Interested In Running For Office?

In 1999, when he was still a young man in his 30s, Barack Obama suffered a humiliating 31-point defeat for a U.S. congressional seat in his home state of Illinois. He was dejected and debated leaving politics for good.

"We need a new style of politics to deal with the issues that are important to the people," he said in a 2007 New Yorker profile, recalling the loss. "What’s not clear to me is whether I should do that as an elected official or by influencing government in ways that actually improve people’s lives."

It's quite the statement from a man who would eventually go on to win the presidency on a message of hope and change, whose rejection of political cynicism has now become a trademark. But as it turns out, even after Obama's eight years in the White House, that political optimism hasn't trickled down to the millennial generation.

The title of Rutgers University-Camden political professor Shauna Shames' new book puts it bluntly: "Out of the Running: Why Millennials Reject Political Careers And Why It Matters." Her research began as an investigation into why women and American minorities weren't running for office. After interviewing and surveying nearly 800 graduate students at some of the most prestigious government and law colleges in the nation, she quickly realized the scope needed to be expanded.

"I realized I had it wrong," she said. "It wasn't men versus women. It certainly wasn't black versus white or Hispanic. It was that there were not that many people who really wanted to run for office at all."

But Shames said it would be a mistake to cast off millennials as the self-obsessed "selfie generation" that's uninterested in improving the lives of everyday people.

"This is such a bright, and thoughtful and caring group of people that I talked to that I was very impressed with their desire to make a difference in the world," said Shames. "But as a political scientist, I started getting not only impressed, but somewhat depressed about their negativity about the actual act of running for office."

Two major forces seemed to be swaying young Americans to pursue other public-service careers in the private sector. Shames refers to it as "the ick factors." Millennials stated repeatedly that they are uncomfortable asking for money — and in case you forgot how many flyers you received in your mailbox around Election Day — that's a big part of the job. Also, millennials said that by accepting the money, they feared it would compromise their judgment and ability to serve as an honest elected official.

Shames added that politics in nature is a profession that requires a series of stepping-stone jobs until it finally begins to pay off. The opportunity costs of bypassing a well-paying gig at a law or tech firm is just too much, particularly among American minorities who said they felt more responsible for providing for their extended family members.

The bad news is that there are about half a million election positions in the United States, and if millennials don't take office, seats could go empty and a functioning government goes out the window. Shames admits that her research has left her feeling a little "bummed out." But she's hopeful that things will change.

"Even in the last couple of weeks we've seen such a surge in politics and such activism that it gives me real hope that a generation that maybe has felt distant or distanced from politics might be coming to understand that the government is not them, the government  is us. And if you don't run for office other people will, and they might not be who you want," she said.