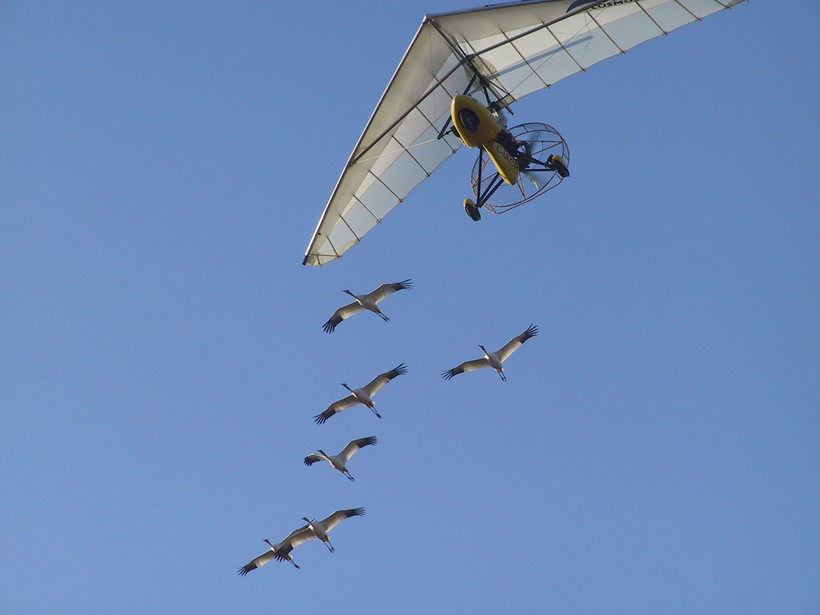 Whooping Crane Group To Take Up USFWS Proposals, Including Phase-Out Of Aircraft

Elimination Of Ultralight Aircrafts From Southerly Migrations Are Among Items
By Chuck Quirmbach
Share:

The future of the whooping crane reintroduction project will be discussed at meetings in Wisconsin this week, with the possible end of migrations led by ultralight aircraft among the items on the table.

In a document outlining its "vision" for whooping crane conservation over the next five years, the U.S. Fish and Wildlife Service recommended last year that the Whooping Crane Eastern Partnership switch to exclusively using adult cranes to lead younger birds on southerly migrations each fall. Currently, the partnership relies on a mix of crane-led migrations, and ones led by costumed pilots flying the ultralight craft.

Fish and Wildlife Service spokesperson Georgia Parham said the agency wants to move toward less-artificial methods in order to "create and maintain a self-sustaining population — cranes that can maintain themselves without artificially keeping them going."

​Operation Migration, which includes ultralight pilots, opposes the potential change. One of the group's co-founders wrote in a blog post Monday that for many years, their team has let personal safety, human comforts, family relations, economic gain and exhaustion take a back seat to the needs of the birds.

The whooping crane partnership will take up the Fish and Wildlife Service's proposals at its January meeting as it develops a new five-year strategic plan, according to a statement on its website.