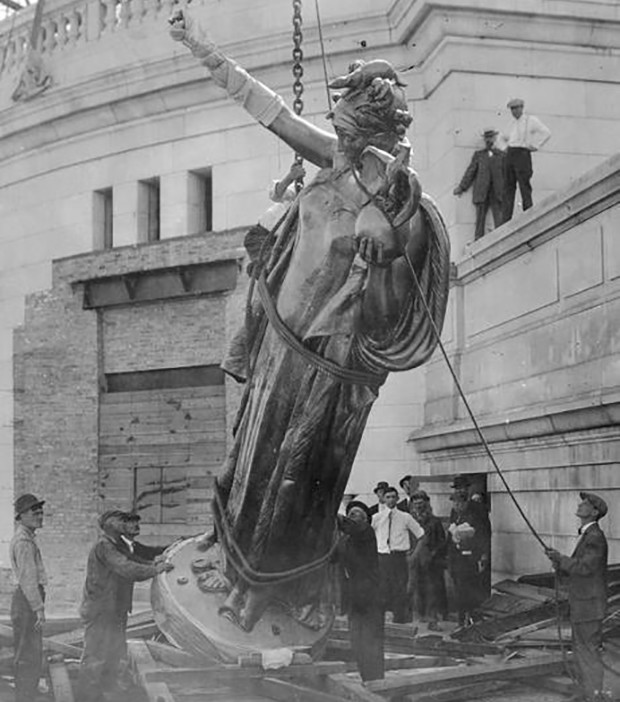 Who’s That Lady? The Lady Atop Wisconsin's State Capitol Dome

Many people misidentify the statue atop the state Capitol in Madison as Lady or Miss Forward. That golden woman is actually Wisconsin, and she’s been standing atop the dome since 1914. Another lady, Forward, stands with her right arm extended at the top of State Street.

The gold-gilded Wisconsin was sculpted by Daniel Chester French, the same artist behind the President Abraham Lincoln statue at the Lincoln Memorial in Washington, D.C. The statue of Wisconsin stands 15 feet, 5 inches high and weighs more than 3 tons. In her left hand, she holds a globe with an eagle perched on it and on her head is a helmet topped with a badger. The Capitol Commission, after much debate and public input, decided to have her face Lake Monona.

The other lady at the Capitol is Forward, the creation of Wisconsin sculptor Jean Pond Miner. Miner had sculpted Forward for the 1893 Columbian Exposition in Chicago after receiving a commission to create a piece of art representative of her native state. Miner crafted Forward as an allegory of the devotion and progress she believed her state embodied.

Her statue was placed at the east entrance of the Capitol in 1895 and moved to North Hamilton Street in 1916. By the 1990s, 100 years of exposure to Wisconsin weather had taken its toll on Forward and the original was moved to the Wisconsin Historical Society headquarters. A replica Forward was installed at the State Street entrance.