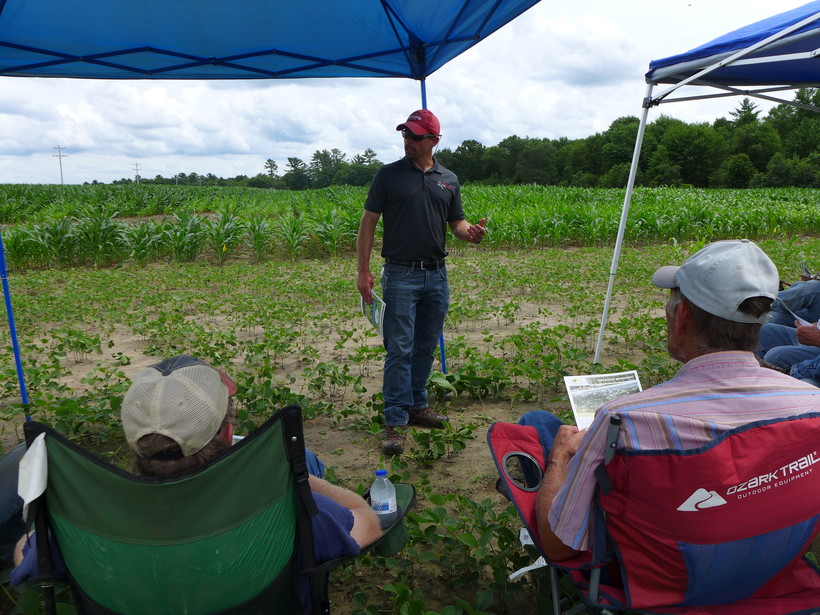 Damon Smith, a plant pathologist for University of Wisconsin-Madison, talks to farmers about how to save money on disease management practices during a Jackson County field day July 17, 2019. Hope Kirwan/WPR

In a corn field near Black River Falls, plant pathologist Damon Smith from the University of Wisconsin-Madison points to a section on the edge of the field where the corn stalks get shorter and paler in color.

"That’s probably where the (flood) water sat," Smith said. "As the water receded, some of this corn was able to emerge. But some of this corn in the middle never did emerge, it just pretty much rotted in the ground."

Wisconsin was one of several Midwest states inundated with rain this spring, after a wet fall and winter. As a result, farmers planted their fields historically late and many ended up with uneven growth stages, just like the field outside of Black River Falls, about an hour southeast of Eau Claire.

"That from a disease decision-making standpoint is complicating things a little bit," Smith said. "We tend to look at specific growth stages to make some of our fungicide application decisions, for instance. And when you have a field that ranges two or three growth stages, when do you pull the trigger?"

Jamie Pfaff, an agriculture educator for UW-Extension in Jackson County, hosted a field day at the end of July for Smith to talk with local farmers about pest and disease management practices they can use this season.

She said these kinds of management decisions aren't just about how to best protect crops from diseases, they can help farmers save money. She said farmers don’t have extra funds to put into their crops after years of low commodity prices and a trade war with China hurting exports.

"Right now, everyone is just looking at their bottom line and trying to cut whatever expenses that they have," Pfaff said. "When you’re spraying multiple fields and you have to put on more than one application, that could make or break the bank really for some people."

It's what Ray Buttke from Merrillan is most worried about. These days, he rents out most of his 500 acres in and around Jackson County to neighboring farms.

He's concerned about neighbors who borrowed during times of high prices in order to grow their operations.

"They're having a hard time getting their crops in and some have had to sell some assets in order to keep going," Buttke said. "If it turns around a little bit, they’ll be alright; but some of them, they're not going to be able to."

Buttke said farmers do have one thing on their side: new tools and access to information to help them keep input costs down.

Smith from UW-Madison said more farmers are reaching out to him on social media.

He's active on Twitter, where farmers share photos with him from their fields or ask questions about certain diseases.

"We’re constantly under pressure to bring more closely-tailored recommendations," Smith said. "One way I’ve been doing that in my programs is to develop these smartphone apps that can pull down GPS-referenced weather to help folks make these decisions."

For example, an app called Sporecaster lets farmers input data like location and plant growth in the field to predict the best time to treat for white mold in soybeans. 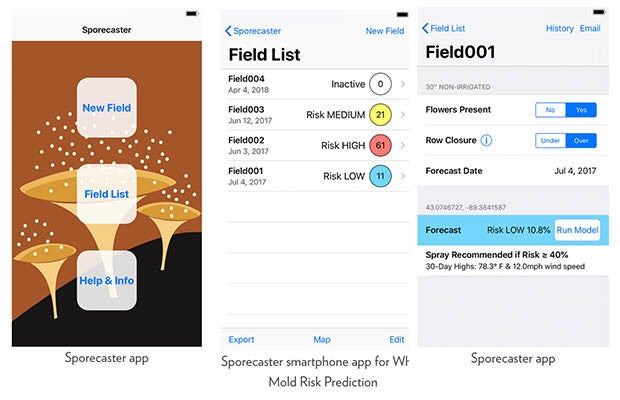 UW-Extension has been working with the state's specialists to roll out more smartphone apps over the last few years. The department also has apps to predict what a farmer's profit margin would be after they apply a pesticide or how much nitrogen a certain corn field needs.

Tools like these will become more important as Wisconsin likely sees more frequent wet weather due to climate change. This year’s rainy spring may have been an anomaly, but Smith points out the state has seen prolonged wet weather at the end of summer for several years now.

"We’ve been in these patterns where we’ve been generally below normal in terms of temperature but above normal of course on rainfall and when we have years like that it's very conducive for many of our fungal diseases," Smith said. "We've really struggled in corn and soybeans, especially over the last several seasons."

He said a newer disease called tar spot swept through corn fields in southern Wisconsin last year. It's already been confirmed in nine counties so far this season.

Today we add Dodge County to the list of counties positive for tar spot in Wisconsin. This make for a total of 9 counties confirmed in the state. Keep scouting and sending samples. @MartinChilvers1 @DTelenko @alisonrISU @ILplantdoc pic.twitter.com/CqL4CqJ58r

Ben Nestingen from Blair, located between Eau Claire and La Crosse, said he uses Smith's smartphone apps — when he can get service.

Nestingen helps his family grow corn and alfalfa for their livestock, but this is the first year he's planted his own acres of corn. 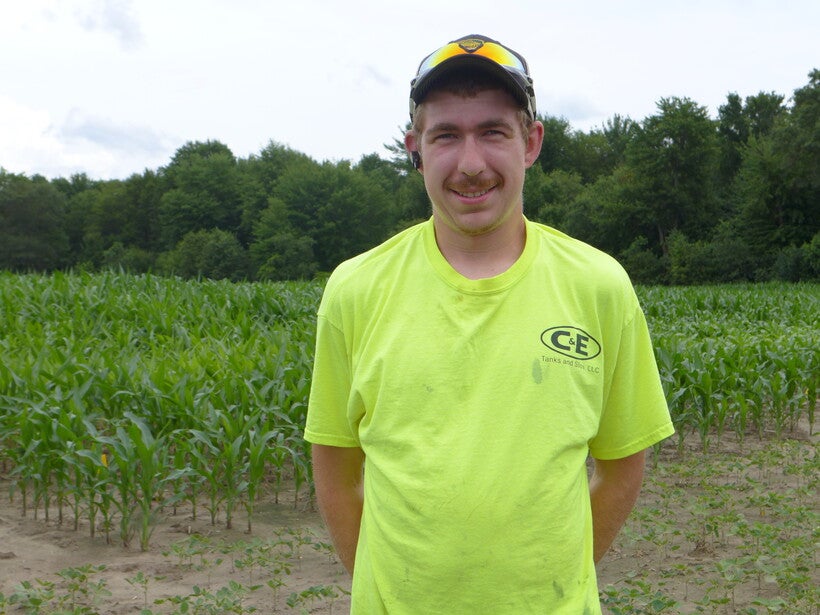 He said the challenging weather hasn't changed his mind about his career.

He said he's hopeful better corn prices are in the near future and farmers will get back to the good years once again.