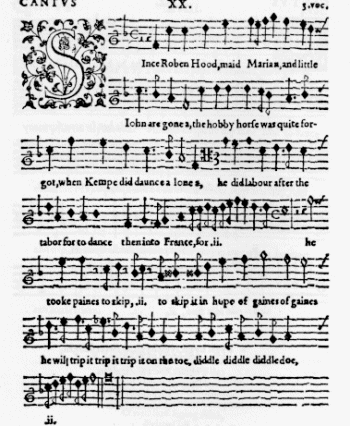 Since Robin Hood by Weelkes

In 1601, at the age of 25, Thomas Weelkes was one of England's most promising musicians. He joined the choir of Chichester Cathedral as an organist and church official. The position came with prestige and money and for several years, Weelkes prospered. He married the daughter of a wealthy merchant and settled into a life of performing and composing. Then his life took a turn for the worse.

The first indication of trouble came in 1609 when Weelkes was censured for being absent from the cathedral during a visit from the bishop, but there's no indication of what the punishment was.

The arrival of a new bishop brought tighter discipline at the cathedral and absences on Sundays and holy days brought the forfeiture of wages for offenders. The crackdown included a warning to Weelkes that he had to spend at least three hours a day teaching the choristers -- or lose his position.

The charges against Weelkes continued -- citing instances of inefficiency, neglect of duty, and drunkenness. Weelkes denied the charge of drunkenness and nothing much happened as a result of it. But in 1615 he was in trouble again when the church's highest-ranking bishop arrived and singled out Weelkes and ten other choir members as being chronically absent. Not long afterward, it was charged that Weelkes was “a common drunkard and a notorious swearer and blasphemer."

In 1617 Weelkes was dismissed from his position but, perhaps because he was hard to replace, he seems to have continued with an unofficial standing in the church. By 1623 church officials were again calling his conduct into question, but Weelkes slipped beyond their jurisdiction once and for all by dying at the age of 49.

Because Thomas Weelkes' first three books of madrigals had promised such a brilliant career, it's been said that the decline of his later years appears all the more tragic.