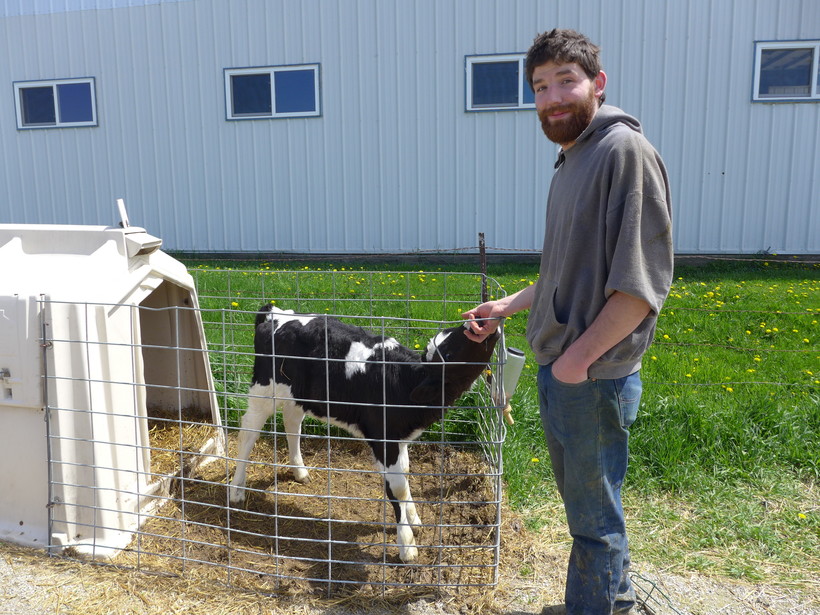 Frank Behling, a dairy farmer near Rudolph, Wisconsin, stand with a 2-month-old calf named Black Mamba at his farm.

Some Farmers Worry Recent Cuts To Milk Contracts Is A Sign Of What Could Happen If Trade Declines
By Hope Kirwan
Share:

But some Wisconsin dairy farmers are worried last month's cuts to milk contracts are an indication of what could happen in trade talks with Mexico and Canada.

"It certainly is a red flag of what may be to come if a renegotiation does come to pass, because it shows what happens when we lose a milk market," said Frank Behling, a dairy farmer near Randolph, Wisconsin.

Behling was one of 58 farmers in the state who were dropped by Grassland Dairy Products when the company lost sales of ultra-filtered milk to a Canadian customer. It took him almost a month to find a new buyer for his milk because most processing facilities were already full.

"This is the latest in what we see as a clear pattern of behavior by Canada," said Shawna Morris, vice president of trade policy for the National Milk Producers Federation. "There have been numerous different actions that Canada has taken over the years that are really aimed at trying to shut down — for one product after another — export of U.S. dairy to Canada." Morris said there are parts of NAFTA that need to be maintained, but a renegotiation could deal with issues that have U.S. farmers concerned, such as safety regulations based more on politics than science, and tariffs that still exist for some dairy products.

"Clearly where we see some of the largest opportunities in these discussions are to address a lot of the unfinished homework on dairy with Canada," Morris said.

But Brian Gould, professor of agricultural economics and agribusiness at the University of Wisconsin-Madison, isn’t so sure.

"I'm not confident that we'll be able to gain anything from renegotiation," said Gould, who is also a state specialist with UW-Extension. "We've had a very good experience with Mexico and Canada since the early '90s, when NAFTA was passed."

Gould said U.S. dairy producers exported about 2 percent of their products when NAFTA was first approved. Now, trade is much more important for the dairy industry, with around 15 percent of dairy products going to exports. Much of that growth has come from trade with Mexico, which Gould said buys around 20 percent of all U.S. dairy exports. So losing trade to Mexico in a NAFTA renegotiation would be disastrous for U.S. dairy farmers.

"Our rate of growth in milk production in the U.S. exceeds the rate of growth in domestic demand. So we really rely on those exports markets to clear our shelves, if you will, and keep milk prices up," Gould said.

"To stimulate (domestic) consumption, we have to reduce prices, and I don't think farmers are willing to absorb that much of a decrease in their revenue stream," Gould said.

Some in the dairy industry feel the reliance on export markets to keep prices afloat might be the real problem. Behling, the farmer near Randolph, said the current oversupply of milk in the U.S. and on the world market is what continues to weigh down dairy prices.

"We're hurting ourselves with the overproduction that we have. I'd rather everyone be profitable instead of trying to (do) this race to the bottom," Behling said.

But not everyone thinks U.S. milk production is a problem.

For those with doubts, Behling points to the panic that Grassland's lost Canadian sales caused among farmers as evidence for the need to reconsider production growth. In previous years, Behling said it would have been easy to find a new processor because milk was always in demand. "It's really put it into perspective for some people," Behling said. "There's been more talk of doing a supply management sort of thing. Other processors in the area have started doing their own supply management, I've heard more about that. And it might push more farmers to retire a little earlier than they had planned."

Whether or not a NAFTA renegotiation is needed, Trump has promised to change the trade deal.

At the end of April, Trump announced he and the other NAFTA leaders had agreed to move toward renegotiations. And on Thursday, the U.S. Senate approved Trump's nominee for U.S. Trade Representative, a key position before renegotiations. But the administration hasn't technically started the process needed to rewrite the trade deal.

For farmers like Behling, the uncertainty of what a renegotiation could bring means he's waiting to make any big changes or long-term investments in his farm.

Editor’s Note: This story was updated at 6:20 p.m. Monday, May 15, to clarify that the "Canadian dairy industry" created new pricing for class for ultra-filtered milk and "Canadian dairy leaders" said the change is a domestic policy.