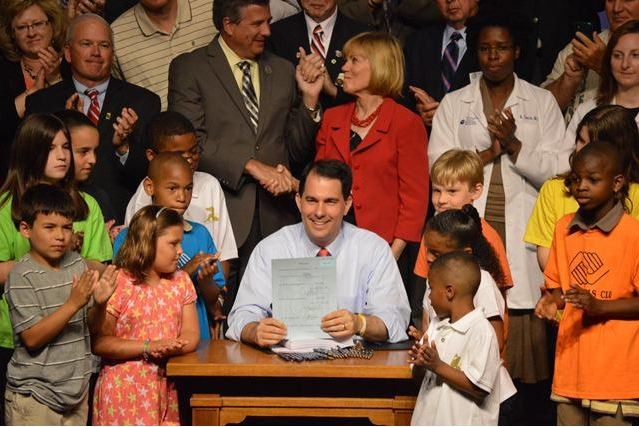 What (If Anything) Should Walker Veto In The Budget? Lawmakers, Observers Weigh In

Now that the 2015-17 state budget is in the hands of Gov. Scott Walker, several lawmakers and observers have some veto advice for him.

The Assembly passed the $72.7 billion spending plan early Thursday morning by a vote of 52-46. The Senate approved it just before midnight Tuesday night, 18-15. The two-year plan cuts the University of Wisconsin System by $250 million, keeps K-12 education funding and property taxes relatively flat, repeals the prevailing wage for local governments and borrows $850 million for road projects.

The governor has line-item veto authority, meaning he can scrap entire budget provisions and even individual words and phrases.

Republican state Rep. Dale Kooyenga of Brookfield, who co-chairs the Legislature’s Joint Finance Committee, said Thursday that he’s overall pleased with the budget. However, he said he would like Walker to strike out a change that would take revenue from local hotel taxes, which in Brookfield currently fund fire and police services, and divert them to tourism.

"I just really, you know, would like to see the local control win out on that issue," Kooyenga said.

Democratic state Sen. Kathleen Vinehout of Alma said that Walker should take the new spending for private voucher schools and give it to public schools and the UW. She also said that he should drop all policy items from the budget. According to her, 135 such items are currently included in the plan.

"If he got rid of all of the policy, the budget would shrink dramatically," Vinehout said.

Journalist and blogger Steve Prestegard said Walker should get rid of a proposal that would limit the public’s access to the names of applicants for University of Wisconsin jobs, a move that he said "does not make sense."

Galen McKinley, an associate professor of atmospheric and oceanic sciences at UW-Madison, said that before Walker signs the budget, she wants him to think about "the future of all citizens of the great state of Wisconsin" and to consider "going lighter" on education.

Walker has not said when he would sign the budget, but previously indicated that he wants to do so before announcing his candidacy for president. He's expected to make the announcement Monday afternoon in Waukesha.