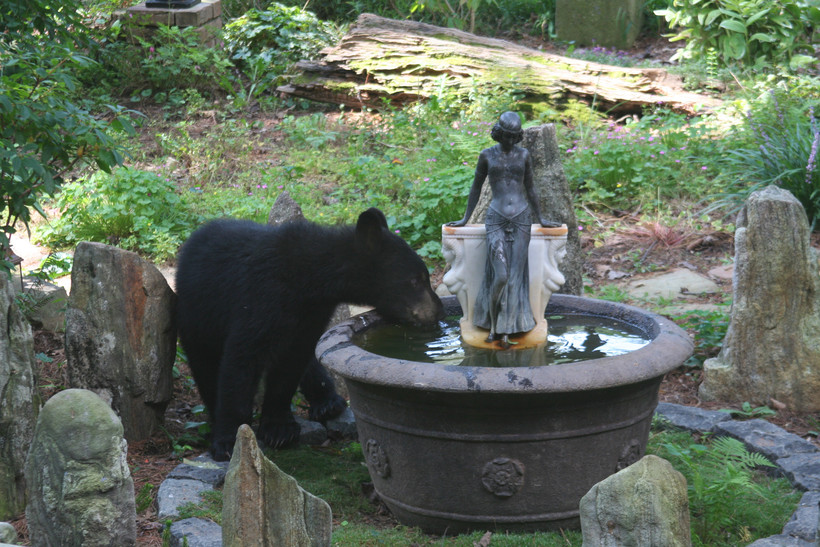 In the mid-1980s, the black bear population in Wisconsin was around 5,000, according to the Wisconsin Department of Natural Resources. The total is around 29,000 in mid-2016. anoldent (CC-BY-SA)

What To Do If You Meet A Black Bear In Wisconsin

Black bears aren't just limited to the Northwoods of Wisconsin -- they've also been spotted in the south.

This year, for example, black bears have made recent headlines for visiting the Baraboo area and Beloit.

The increase in bear sightings in the southern part of the state is a relatively new happening over the last few years, but it's becoming more common, said David MacFarland, a carnivore specialist for the Wisconsin Department of Natural Resources.

"This time of year is the time we expect that to happen as this is the time when especially young males are on the move," he said. "We're in the breeding season for bears, so not only do we have bears roaming the landscape looking for mates, but also it's the time when the young bears are booted out from the mother that they've been spending the last 15 or so months with, and so they're roaming around, looking for new territories as well."

The range for bears is expanding, and has been for a long time, MacFarland said. A quick history lesson: In the mid-1980s, bear managment in Wisconsin saw a "pretty significant" shift that was designed to increase the population of the animals. At the time, there were about 5,000  bears in the state. According to the most recent population monitoring data, the amount of black bears in the state is in the neighborhood of 29,000, MacFarland said.

"We've had a significant increase in the number of bears in the state, but that's also been accompanied by range expansion," he noted.

MacFarland said that documents from the DNR in the mid-1980s had comments saying that it would be unlikely that bears would ever live south of Highway 64, which runs north of Wausau and Chippewa Falls east to west across the state.

"Clearly, we have bears far south of that point," he said, noting that they're starting to see continued expansion of black bears into the Driftless area, around La Crosse, down into Richaland and Sauk counties, and even farther south on a more regular basis. "While these bear sightings are new for the folks down in Rock County and Green County, Iowa County, it's really just the latest front on what has been expanding bear population over the last 30-plus years."

Risk to humans from bears is relatively low and there's really more of a risk for property damage. That being said, though, MacFarland noted that there have been people hurt in bear-human interactions in the state, although it's rare.

The best thing to do if you run into a bear is to give them their space and let them get out of there, MacFarland said.

Other tips from MacFarland and the DNR include: