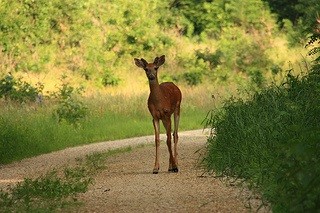 Whether we are hunters, birdwatchers, or just casual visitors to our state’s natural areas, policies to manage Wisconsin’s wildlife affect us all. And one of the most closely watch programs is the management of Wisconsin’s deer herd by the Wisconsin Department of Natural Resources (DNR). Currently, attention is focused on implementation of deer trustee James Kroll's report and recommendations.

Scott Craven is an emeritus wildlife specialist with the UW Extension and emeritus professor of wildlife ecology at UW-Madison. He explains that the deer trustee’s report was released last summer, “covering just about everything that you could think of that dealt with deer management.”

In order to implement the recommendations, The DNR and Governor Scott Walker established several volunteer committees to address the larger topics in the report. Those areas are Herd Health/Chronic Wasting Disease, Deer Management Assistance Program (DMAP),  Regulations & Seasons Structure, and Science & Research. Committees began meeting in March of this year and wrapped up in July.

The proposals that those committees produced are now in an input period via public hearings and comments submitted on-line. After the comment period, according to a DNR press release, “from here, rules will be drafted by DNR based on the action team implementation proposals. Proposed rules will be subject to public hearings this fall. The Natural Resources Board will review comments on the rule package that is developed from the implementation proposals before making a decision on rule adoption in December.”

The DNR has created a landing page where visitors can read the report and recommendations, and to read updates on the process. You can also subscribe to get email updates about the deer trustee’s report.

One deer policy that is not part of the deer trustee’s report is a push to legalize deer and other wildlife as pets. As WPR news reports, the issue came up in a very public way when “armed DNR agents and sheriff's deputies killed a fawn that had been brought from Illinois to an animal shelter in Kenosha. Some accused the DNR of being callous and using unnecessary force, but DNR Lands Division Administrator Kurt Thiede says under current state law, they had no other options. Since the fawn was in a Chronic Wasting Disease Zone, it couldn’t be set free and it couldn’t be rehabilitated.”

Craven points out that “that kind of thing just drives the public crazy.” There is a proposal on the table now to provide a little more leeway, but Cravens says that it is being incorrectly described as intending to allow wild animals as pets when they are captured or found. But Craven points out that that would run counter to the agency’s captive wildlife policy, “which took years to develop.”

In addition, Craven says to allow wild animals to be treated like pets is “frankly, just a dumb idea. There’s really no place for wild animals as pets. And to open the door even a crack is opening Pandora’s box.”

Craven explains that the proposal is not as simple or straightforward as lifting a ban. Instead, in order to be able keep a fawn, for example, the proposal would require a proper enclosure, proof of veterinary inspection and care, payment of fees, and compliance with other possible controls.

Craven points out that this proposal is in its early stages, but as the incident with Giggles the fawn demonstrated, he thinks there is “broad support for the notion that animals brought into licensed rehabilitators, who know how to take care of them, or animal shelters, if those animals recover to the point that they could be released, given the constraints of disease management, like CWD … that those animals could be released back into the wild. Craven adds that one aspect would be that a deer from a CWD area would have to be released back into one. He hopes that if policy is created that will allow for more compassion and more reasoned responses that it will help to avoid the disastrous situations like the public outcry against the DNR’s treatment of Giggles.