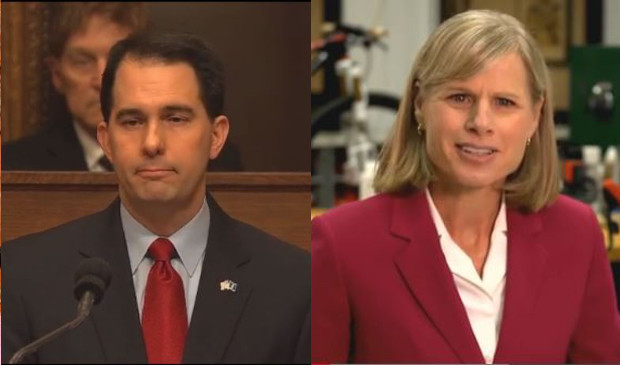 Photo: Office Of The Governor And Mary Burke's YouTube Page

As the courts proceed to go back-and-forth on the John Doe investigation into Gov. Scott Walker’s recall campaign, a former Wisconsin state senator said he doesn’t expect it to have much of an effect on this November’s gubernatorial election.

“I think people’s opinions on the governor are so polarized,” said Joe Wineke, on Friday’s “Week in Review” program.  “Second, I think if there’s one thing that this back-and-forth and tit-for-tat is going to do is, it’s going to drag this whole procedure past November.”

However, Wineke, who’s also a former chair of the Democratic Party of Wisconsin, said that Walker’s name is being associated with a lot of suspicious activity, which very well might hurt him on Election Day. The current John Doe investigation is looking into allegations of coordination between Walker's recall campaign and conservative groups.

“There’s still the drip, drip, drip on the governor about ‘things just don’t seem right with this guy.’  There’s just too much stuff that seems to happen where he seems to circumvent the law to do whatever it takes to win,” he said.

Wineke also predicted that the vote would be 51-49 percent either way and that Walker “could well lose.”

“I think if Scott Walker doesn’t take (Mary Burke) seriously, he will lose,” he said.

Sharpless said that he didn’t initially see Burke as a threat, but that he has been impressed with her private-sector experience.

“She can look right at him and say, ‘Scott, when was the last time you’ve met a payroll?’” he said.  “I think that gives her a very strong basis.”

Sharpless also said that Burke has closed the gaps in recent polls in a way he said he didn’t anticipate.

A mid-April poll by the conservative-leaning Liberty Foundation and Magellan Strategies had Walker and Burke tied at 47 percent.

Editor’s note: The “Week in Review” can be heard each Friday at 8 a.m. on the Ideas Network of Wisconsin Public Radio.