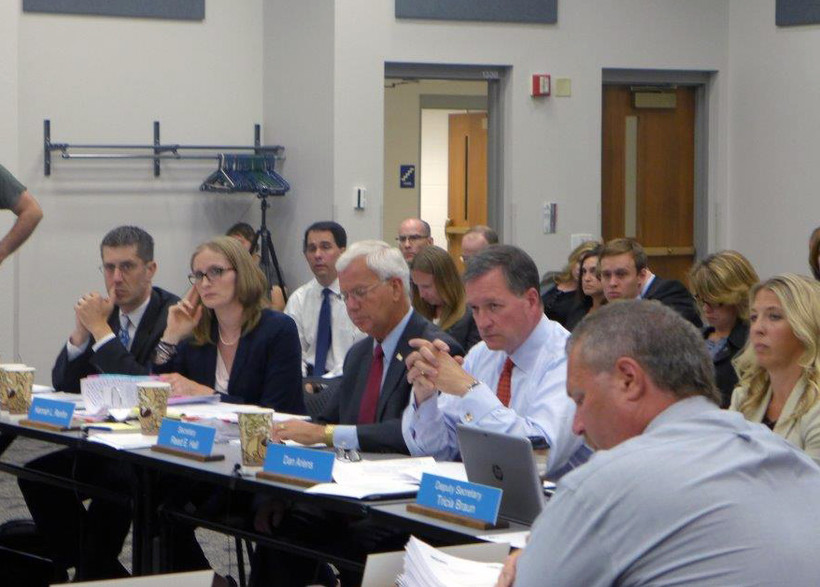 Members of the WEDC board at a meeting Monday in Oshkosh. Gov. Scott Walker is visible in the background.

Democratic Board Members Call For Policy Changes At Troubled Agency
By Patty Murray and The Associated Press
Share:

The board unanimously elected board member Dan Ariens, president and CEO of Ariens Company, as the new board chairman during a meeting Monday at Fox Valley Technical College in Oshkosh.

Walker created WEDC in 2011 as his flagship jobs creation agency. The agency has been plagued by mismanagement and questions about handing out loans without properly vetting recipients.

Overall, $1.7 million in loans have gone unpaid, the bulk of the money is owed by two companies.

While Walker is no longer a part of WEDC, he attended Monday's board meeting as a "visitor." He insisted the agency has made improvements.

"It's a new entity. Over the last four years have there been hiccups along the way? Sure," he said.

A legislative audit in May showed a lot of hiccups, enough for board member and Democratic state Rep. Peter Barca to introduce two motions. One would require stricter legal scrutiny before the interest free loans are made. Another would "make sure we're referring to district attorneys and legal authorities when we know there's been fraudulent circumstances under which borrowers receive loans," Barca said.

Some recipients haven't disclosed outstanding debts or legal obligations. One of Barca's motions was tabled, and the other wasn't taken up.

WEDC has been buffeted by recent criticism following reports that it handed one of Walker's major donors' companies an unsecured $500,000 loan that hasn't been paid back. Another audit found the agency handed out 28 awards to 24 companies without a staff review between mid-2011 and mid-2012.

Editor's note: This story has been updated to include reporting by Wisconsin Public Radio.