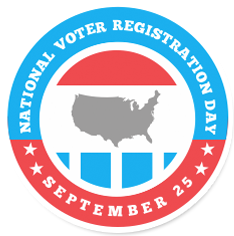 Tuesday is National Voter Registration Day. Wisconsin election officials have a new website where people can register called My Vote Wisconsin. On that same site, they can also find where to vote, and other election requirements.

Officials with Wisconsin's Government Accountability Board estimate there could be as many as 3 million voters for the presidential election. That is roughly equivalent to state turnout at the polls for the last two president elections. What will be different for some is where they vote.

Kevin Kennedy is Executive Director of the Government Accountability Board. He says, "For a large number of Wisconsin voters, November 6th will be their first time at the polls since legislative redistricting. Many people, even those who participated in the historical recall election June 5th, have moved. Many are in new districts, and some have new polling places."

Where to vote, how to register and other personalized election information can be found on the secure government website MyVote.WI.gov. October 17th is the deadline for registering to vote by mail or in person at a local clerk's office. People can also register on Election Day with proof of residence.

Because Wisconsin is considered a battleground state, Kennedy says there have been a lot of efforts by various groups to get people registered to vote, and it can be confusing. "We want to help cut through the clutter, getting people prepared by giving them a tool. There's a lot of websites out there, and there's a lot of public contact [from other groups]. This [MyVote.WI.Gov] is what we'd really like people to use."

Absentee or early voting will be limited to two weeks before the election. In 2008, Kennedy says one in five voters cast their ballot early, most in person.