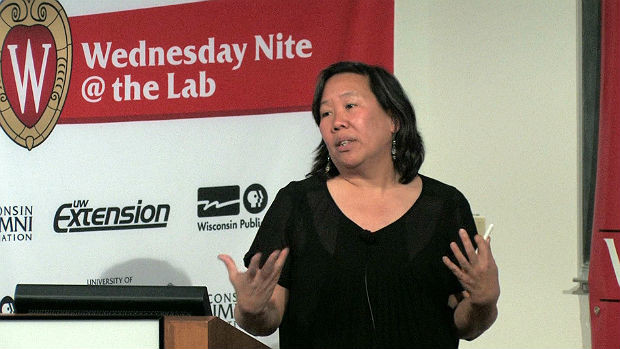 Microbiologist Sharon Long discusses how she uses unique characteristics of microorganisms to track the source of fecal contamination of drinking water.

Waterborne pathogens can cycle between the environment and their human and animal hosts, causing illness in people and spreading disease between households. To determine how fecal matter contaminates groundwater, scientists use indicators that specify the source, identifying it as human or animal waste.

University of Wisconsin-Madison microbiologist Sharon Long discussed how she and staff at the Wisconsin State Laboratory of Hygiene use unique characteristics of microorganisms within or on a person’s body -- her or his microbiome -- to track the source of fecal contamination of drinking water in a Nov. 5, 2014, talk at the "Wednesday Nite @ The Lab" science series on the UW-Madison campus.

Humans, cows, agricultural poultry and wild geese can shed pathogens through their urine and feces, Long said. Humans shed norovirus for up to six months after their 24- to 48-hour symptoms of vomiting and diarrhea subside. Pathogens from fecal waste can migrate into drinking water.

To determine whether drinking water is safe, it is monitored for what Long called "indicator organisms" that are highly associated with the pathogen sources. These indicators include total coliform bacteria, thermotolerant (fecal) coliforms, E. coli, fecal streptococci/enterococci and bacteriophages.

To track a pathogen’s source -- farm or human -- Long and her staff use "fecal source tracking," a suite of about 25 tests that can identify sources of contamination and, at the very highest level, whether they were introduced by humans or animals. If trying to determine whether a pathogen was shed by cows or humans, Long would consider differences in their microbiomes. They might test a sample to determine whether it contains the artificial sweetener sorbitol, caffeine or milk. If it does not, the pathogen’s source is likely nonhuman -- the bovine menu does not include these items.

Long illustrated fecal source tracking by recounting her work in a residential area near where a farmer spread cow manure. After 3.5-inches of rain over 24 hours, several residents of a nearby housing development called the Wisconsin Department of Natural Resources to report their wells smelled like manure and asked the agency to test them.

The homes had private wells and septic systems.

Long found a lot of general contamination from grazing and other animals. Sorbitol was below detection limits, the caffeine marker was low, and other tests indicated dung from herbivores. The presence of atrazine suggested farm runoff. Ultimately, the fecal matter was traced to grazing animals and the homeowners qualified for state aid to remediate their wells.