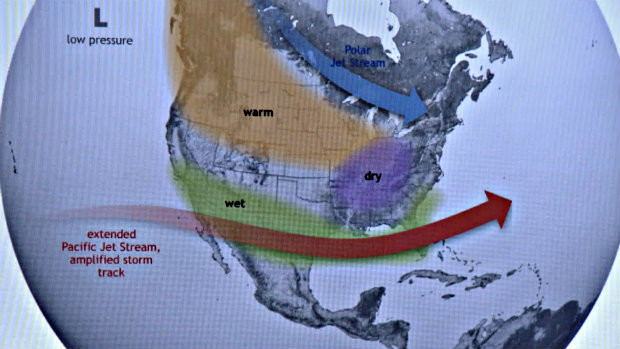 A diagram shows how El Niño is forecasted to affect winter weather in the U.S.

Predictions about the El Niño Southern Oscillation (ENSO) cycle and the complexity of the phenomenon itself can easily create confusion about its impacts on weather and the economy in the U.S. and around the world.

Daniel Vimont, an associate professor of atmospheric and oceanic sciences at the University of Wisconsin-Madison, shared a sobering perspective about ENSO in a Sept. 4, 2015 interview on Wisconsin Public Television's "Here and Now" program.

In the interview, Vimont gave a rough overview of how ENSO works, how monitoring data can help farmers in southeast Asia endure the impacts of a strong El Niño pattern, and of why predicting its impact in Wisconsin and the broader Midwestern U.S. isn't simple. He also spoke about why he finds ENSO so fascinating.

Vimont also points out in a recent Q&A with the Nelson Institute of Environmental Studies at UW-Madison, he doesn't see El Niño, despite its undeniable power, as an entirely bad occurrence.