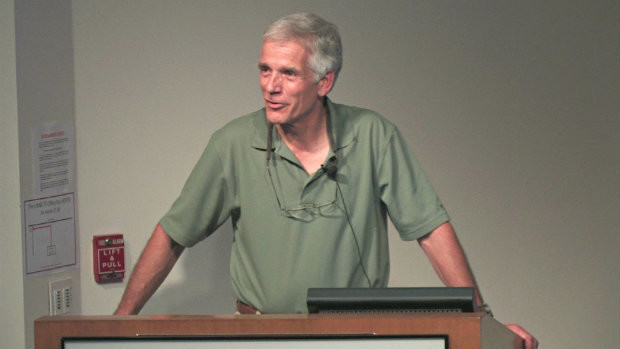 Hydrogeologist Kenneth Bradbury describes how he and colleagues are tracking viruses in underground drinking water.

Leaky sewer pipes might be the source of viruses found in drinking water that Wisconsin municipalities draw from bedrock aquifers 800 feet below ground, research hydrogeologist Kenneth Bradbury said in an Aug. 1, 2012, talk at the "Wednesday Nite @ The Lab" science series on the University of Wisconsin-Madison campus.

Bradbury, who is a professor with the Wisconsin Geological and Natural History Survey, which is part of UW-Extension, described how he and colleagues are boring into the earth to track viruses that cause diarrhea and vomiting in humans, following up the surprise finding that these pathogens are found hundreds of feet below ground in drinking water. He and his colleagues studied wells used by the Madison Water Utility, but he said the same problem likely occurs in most urban areas with bedrock aquifers.

Groundwater moves through different types of rock formations into wells used by municipalities and individual property owners. Bradbury said that, before the research started, no one thought viruses could exist in the deep aquifer -- a thick layer of sandstone that absorbs and retains water -- that is a source for drinking water across much of Wisconsin.

Bradbury and his colleagues also looked at weather patterns in the Madison area over these years, which included three periods with a lot of rain: in August 2007, and twice during the summer of 2008. These bouts of intense precipitation led to a lot of groundwater being recharged. This regeneration corresponded with their detection of many types of viruses in the samples from the various water sources. When wells tested positive for viruses, sewage had greater concentrations of viruses as well. The types of viruses found in each well also coincided with the kinds of viruses found in the sewage.

The geographic dispersal of the viruses found in Madison's water suggests the contamination was not due to an issue with a single well or a solo event like a spill, Bradbury said. Rather, the problem might stem from how older sewer systems and municipal wells interact with fractures in the aquitard, a rock layer of limited permeability that impedes the flow of groundwater down into the deep aquifer. Sewers are often old and they leak. Older, "cross-connecting" wells were drilled more than 700 feet into the deep aquifer to draw water, but their casings only extend to the shallow aquifer that is closer to the earth's surface. These older wells might facilitate the movement of viruses through the shallow aquifer and into deeper groundwater. Newer wells extend their casings into the deep aquifer below the aquitard, theoretically providing better protection from contamination of the water.

Fractures have been found in the shallow aquifer and the aquitard, Bradbury said. These paths through the bedrock might intersect with wells and allow viruses to reach the drinking water.