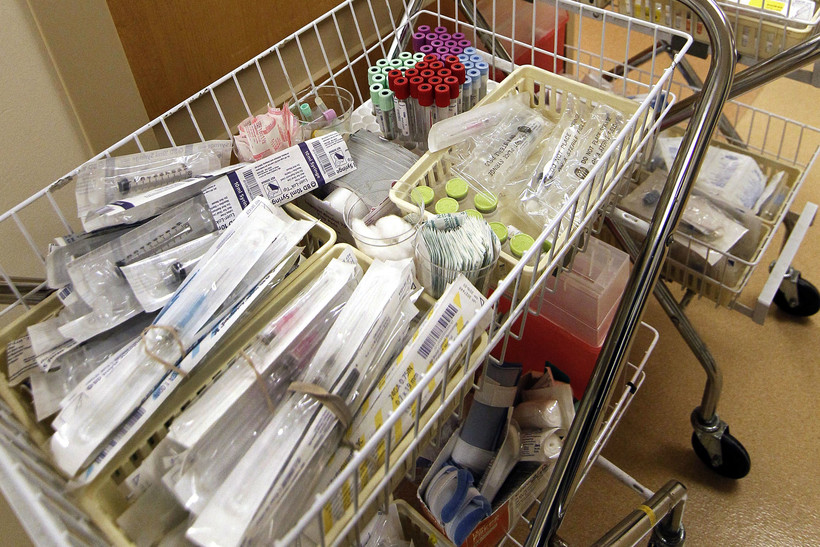 Waste Is The Norm In US Hospitals, Nursing Homes

Imagine a warehouse the size of a school gymnasium — about 10,000 square feet — completely filled, at times all the way to the ceiling, with medical supplies. Gloves, masks, surgical sutures, bandages, catheters, nasal cannulas — the list goes on. Some of it’s used, but most of it’s new, and all of it's discarded by hospitals.

That’s what Marshall Allen, a reporter covering patient safety at ProPublica, found at the Partners For World Health warehouse in Portland, Maine.

Partners For World Health collects new and lightly used medical supplies and equipment discarded by hospitals and ships them to developing countries around the world. There are other organizations like this in the United States. Most of them ship the supplies overseas, although according to Allen’s research, rural American hospitals could use the help as well.

Although it’s a good thing these organizations exist, and are collecting and donating supplies that would otherwise be thrown away, the fact remains supplies are being needlessly discarded on a huge scale, Allen said.

Allen was spurred to investigate this waste because of a 2012 National Academy of Medicine report estimating the U.S. health care system wastes $765 billion annually, about a quarter of its total spending on health care. It’s hard to know hard numbers on how much is actually being wasted, because not all hospitals keep track of what they throw away, Allen said.

"I think that’s part of the problem in health care in the United States in general. Everything is fragmented, and everybody’s kind of siloed, doing their own thing," he said. "And so collectively, there’s no one who really has this responsibility" to keep track of what’s being thrown away.

But why is it such a regular occurrence for hospitals to throw away perfectly good medical supplies and used but working equipment? There is a myriad of reasons.

One common cause of unnecessary waste is what happens when a hospital switches vendors on a particular item. A hospital "may get all of their saline solution from one vendor, (then) they switch to another vendor. And instead of using up the old stuff, the new vendor will give them credit on the old material so that they can switch immediately to start with the new vendor," Allen said. So the old brand goes in the trash.

Another cause is medical staff ordering more equipment than needed.

In one study at the University of California, San Francisco Medical Center, researchers looked at the tools used in neurosurgery and found supplies were often laid out before surgery and then never used during the procedure. The unused tools were then discarded. That amounted to $2.9 million worth of wasted supplies over the course of a year — and that was just for neurosurgery at that hospital, Allen said.

In another instance, Allen talked to a hospital that donated boxes and boxes of surgical sutures, which cost hundreds of dollars per box. The hospital said they had taken over another doctor’s clinic, and that doctor used a different brand of surgical sutures.

The big problem here is that there’s no one organization to collect these discarded supplies and connect it to people who need it. So even if hospitals want to stop wasting supplies, there’s not a uniform system in place for doing that, he said.

"When you start asking these questions of people within the hospitals, there is a sense of shame that people feel, because they know that a lot is being thrown away that could be reused, or could be used at all," Allen said. "If there was sort of a central repository, you know, an organization that could manage these things and inventory these things," there would be less waste and less need.

There’s a similar problem when it comes to nursing homes throwing out prescription drugs. "It’s estimated to be hundreds of millions of dollars in drugs that are just being thrown away in the United States every year," Allen said.

That’s really a function of the way that prescription drug distribution at nursing homes works, he said. Rather than having an in-house pharmacy, nursing homes get their drugs from long-term care pharmacies that distribute drugs for a month at a time for all the nursing homes in a given area.

If a patient’s prescription gets discontinued for some reason, all the rest of that month’s supply gets thrown away — often, Allen found, flushed down the toilet, in spite of the environmental risks of that practice.

"I talked to one nurse who said she spent about one eight-hour shift every month sitting with another nurse in front of a toilet, popping pills out of blister packs and flushing them down the toilet," Allen said.

Because these prescription drugs are usually already paid for through Medicare, there’s little incentive for medical staff to save them.

Iowa is one state that has an organization that collects these unused prescription drugs and gives them to needy patients for free. But most other states don’t follow that practice, as Allen wrote in his investigation.

"The thing I’m trying to connect here is the connection between our rising health care costs and the amount that’s being wasted," Allen said. "If about a third to a fourth of all the money spent on health care is, in some cases, going down the drain; then it seems like if they could save some of that money, and if they could be a little more efficient … theoretically, at least, it could bring down the cost of care for all of us," he said.