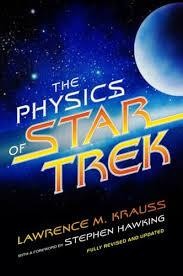 While the science fiction world of "Star Trek" may be a pop-culture classic, the science isn't always on target. A theoretical physicist says the television and movie franchise can open the door to lessons about real-world science.

Lawrence Krauss, of Arizona State University, who will speak Wednesday night in Madison, said pop culture can be a great point of entry to learn lessons about science.   He points toward educational research that shows that "the only we to teach people is to confront their own misconceptions. 'Star Trek' and a lot of science fiction is full of misconceptions, so it's great fodder top use those ideas and surprise people."

The transporter is one of the most famous pieces of technology in "Star Trek."  Krauss said the premise behind the technology -- completely disassembling a human, transporting the atoms and reassembling them elsewhere -- is unwieldy.

"First of all, disassembling you would require heating you up to maybe a 100 million degrees, and probably releasing as much energy as a 100 nuclear weapons," he said.

He said it would be easier to use an inspiration from the Internet and 3-D printing.

"I would scan you and get all the information that makes you a human being and send that info from here to there and combine it with atoms I already have and make another copy of you," he said.

Krauss said both models of transporter run into the same roadblock: the Heisenberg Uncertainty Principle, which states that people can't know the exact location of atoms and their momentum at the same time, making it impossible to perfectly recreate the transported human.  He said "Star Trek" writers invented a "Heisenberg Compensator" to explain that away.

Another problematic technology is faster-than-light travel, with the starship Enterprise zooming around the galaxy at warp speed. Krauss said there is some physics behind the idea of warping space at speeds faster than light.

"We can't travel through space faster than light, but space can do whatever the hell it wants," he said.

Although space can move faster than light, it doesn't help us get around that fast.  Krauss said there are roadblocks because people would have to have a way to signal space to warp the way people want it, and that signal would be limited by the speed of light.

"Even if we do imagine a warp drive, where you're carried away by space," he said, "you still can't move from one place to another and get there from the beginning of the time you tried to the end faster than light."