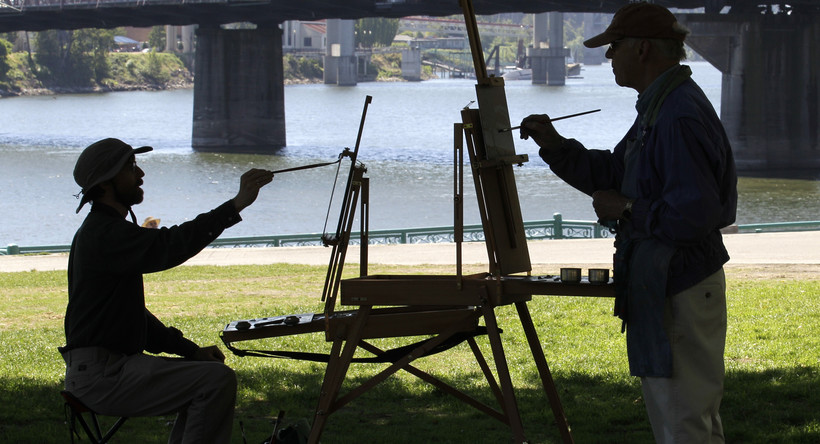 Want To Be More Creative? Find Some Quiet Time

Creativity is reserved for artists — it’s an easy mind trap to fall into. But Matt Richtel, a novelist, cartoonist and reporter for The New York Times, says it’s in all of us, we've just gotten good at silencing it.

"Creativity gets silenced very early in life because much of civility depends on us being uniform, so lots of rules get set down," he said. "We’re not just talking artistically, this is an argument for pragmatists and artists alike."

But tapping into that creative voice can be challenging. And if it’s a muscle you haven’t exercised in some time, it can be daunting to dive back in.

While ideas can’t be forced, Richtel says there are steps you can take to make thinking creatively feel more natural.

"The very first step in accessing your creativity is learning to live with a little bit of quiet and watching what appears in that space," he said.

The ideas that cross our minds, typically during very quiet times, are easy to miss, Richtel said. And there are two reasons why that can happen.

"The first reason is that silence is scary as heck," he said. "What we tend to do is when the world gets quiet ... we fill it with busy things, and we fill it both because there’s an opportunity to fill it and also because silence is scary and we don’t know what we’re going to find there."

You can train yourself to become more attuned to those ideas, he said. A good place to start is when you go to bed at night.

"Before you go to bed, honor the things you think about," Richtel said. "If it’s meeting someone new, a business idea or a story you tell yourself, just listen to that. Not because that’s the idea you’re going to pursue, but because that’s the habit of listening to yourself in a quiet moment."

Determine whether your idea is worth pursuing.

This is difficult even for those who are practiced at it, Richtel said. But you can start by asking yourself how strong the inspiration is.

"There are times when I have a book or song idea that is so overpowering that I know it is going to be unavoidable," he said. "And there are times I have an idea that feels very exciting in the moment and I also don’t know whether I’m going to have the energy to pursue it, and so I write it down somewhere."

But he cautions against thinking too hard about the idea.

"The problem with going to the replay booth is that it often introduces an idea that is the mortal enemy of all creativity ... perfectionism," Richtel said.

He urges people to at least put the idea through the imperfection test for a time and know an idea can be both imperfect and great.

Embrace creativity for yourself, not for the end product.

Execution and creativity are not the same thing, he said. And there’s also a difference between a really hard and a really painful task. The process becomes painful when the end goal is put before the process, he said.

But, if you’re going through a tough spot, Richtel recommends trying a different time of day to work on your task.

"You’re probably going to have to find some time where the execution feels less painful," he said. "What you may discover along the way is that the execution is as enjoyable as the inspiration. That’s how you know you found your niche."

Don’t let your inspiration 'dupe you.'

Because execution is less exciting than inspiration, when you run into a rut, the ideas pour in, he said.

"Something really powerful that I’ve learned in my own life, and that I have to be a little bit careful about, is that sometimes when you start to hear this muse, it can actually become oddly detrimental when you allow it to become a procrastination technique," Richtel said.

This is where you have to exercise some discipline, he said. Focus on the task at hand, and save the other ideas for another time.

"Don’t let the muse dupe you, she is voracious," he said