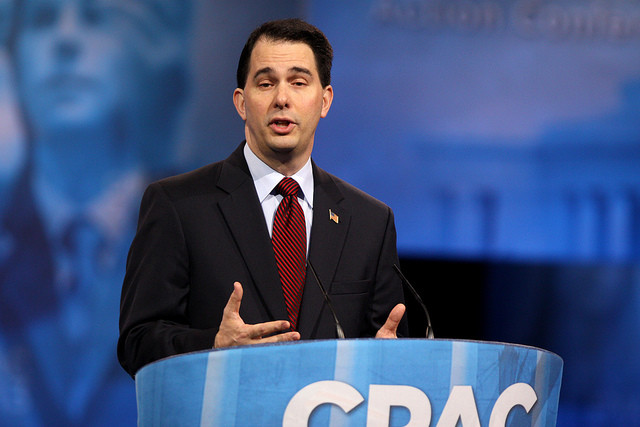 Gov. Scott Walker talked about his 250,000 jobs pledge frequently in the earlier stages of in his governorship. Photo: Gage Skidmore (CC-BY-SA).

ListenDownload
Walker's 250K Jobs Promise Won't Likely Be Met By End Of First Term
Has Government Gotten Smaller Under Scott Walker?
Walker Veers From Promise Not To 'Spend More Than You Have
Series Page: Walker's Promises, By The Numbers

In 2010, Gov. Scott Walker told voters that if elected, he'd help Wisconsin add 250,000 private sector jobs in his first term. Based on the numbers released so far, it's a promise the governor won't be able to keep.

Part of what made Walker's 250,000 jobs pledge memorable is the ambitious size of the number. The promise also endured because Walker kept talking about it. In December of 2010, even though the campaign was behind him, then-governor-elect Walker gave a speech to the Dairy Business Association where the promise was front and center.

“For me, the measure that I'll face in four years is not what press release did I put out, and whether or not my ads are kind of cool or anything like that,” said Walker. “The real measure would be what did I do to create an environment to help create 250,000 new jobs in Wisconsin and were we successful or not.”

Walker no longer brings up the 250,000 jobs promise on his own these days. Based on numbers released Thursday, it's easy to see why. Highly accurate quarterly data from the Bureau of Labor Statistics showed Wisconsin had created just short 91,813 jobs in Walker's first three years in office. Add preliminary numbers from the first five months of this year and that goes up to about 102,000 --  a total that's 148,000 jobs short of Walker's promise.

Labor economist Laura Dresser with the Center on Wisconsin Strategies said that 250,000 wasn't a bad goal.

“It was about the right number of jobs to pledge in terms of what would get us to 2007 levels of employment,” she said. “So it's not a bad number. It turned out to be a bad guess.”

University of Michigan labor economist Donald Grimes said the problem with any governor pledging to create jobs is that the economy is mostly outside of their control.

“Is it ill-conceived to sort of make a promise that you can't really influence? I would say yes,” he said.

Data is from Bureau of Labor Statistics.

Extra Private-Sector Jobs Wisconsin Would Have Added Since Jan. 2011, Had It Grown At The National Rate Or At The Rate Of Other States

Data is from Bureau of Labor Statistics.

It's not just that Walker stands to fall short of his own promise: Since he took office, private-sector jobs have grown slower here than in all neighboring states and the nation as a whole. To put that in context, if private sector jobs had grown at the same rate in Wisconsin as they did nationally, Wisconsin would have added another 57,000 private-sector jobs during Walker's time in office.

“It took money out of the pockets of a group of Wisconsin taxpayers and had kind of a de-stimulus effect on the overall economy,” said Levine.

NorthStar Economics CEO David Ward believes that argument's not without merit, but he said nine out of 10 workers are in the private sector, meaning most workers were not affected by Act 10. Ward, who's also an interim vice president for the University of Wisconsin, said that what it comes down to is that Walker promised a big number, when in reality, Wisconsin's job growth has been kind of average.

“Probably the biggest lesson here is that when you put those kinds of numbers out there, you're assuming that things are going to get a lot better a lot faster, and they didn't,” he said.

Economists say the state won't hit Walker's number by the end of his first term, but it might not hit it in a second term either. If growth continues at the same rate it has been, it would be early 2019 before the 250,000 jobs promise becomes reality.

Editor's Note: This report was the third of a three-part series on "Walker's Promises: By the Numbers."