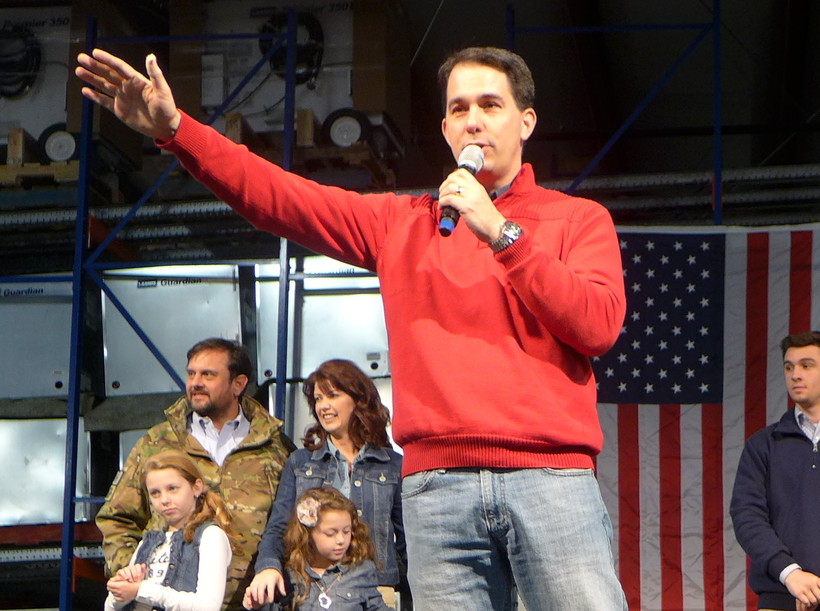 Gov. Scott Walker has said that a right-to-work bill during the next legislative session would be a "distraction." Photo: Maureen McCollum/WPR News.

Republican state lawmakers who back right-to-work legislation will likely force party leaders’ hands on the issue. According to to one conservative columnist and blogger, that includes the hand of Gov. Scott Walker.

Senate Majority Leader Scott Fitzgerald told right-wing talk radio host Charlie Sykes on Thursday that there was no way to avoid taking up a right-to-work bill, under which businesses and unions would be prohibited from forcing employees to pay union dues as a condition of employment. Fitzgerald that the matter needs to be dealt with “right now.” (Listeners can hear that interview here: Start at the 12:10 mark to hear Fitzgerald’s comments on right-to-work.)

West Bend Daily News columnist Owen Robinson said on Friday that he believes Fitzgerald wants to get right-to-work legislation out of the way so that it’s not a distraction during state budget deliberations.

Walker, however, has been urging the Legislature to focus on his agenda, which includes tax reform, education, regulations and entitlements. He said pursuing right-to-work would be a distraction, and that lawmakers should at least wait until after the budget’s passage before doing so.

However, right-to-work supporters in the Legislature appear to have had enough inaction. This week, Rep. Chris Kapenga, R-Delafield, said he planned to introduce a bill in the upcoming session, which begins in January. Kapenga also authored legislation previously, but it was not taken up because he said it lacked the votes to pass. Now that Republicans have a greater advantage in the Assembly and Senate, and the legislative body is more conservative on the whole, a right-to-work bill could stand a better chance of passage.

“What I think you really see here is a lot of Republican activists and Republican-base people saying, ‘Now is the time. We want to pass legislation that is important to us, that we think is important for Wisconsin,’” said Robinson, who supports the measure. “Now is the time to do it — when you have a Republican Legislature and a Republican governor, even if the leadership doesn’t want to.”

Robinson went on to say that GOP leadership could not simply kill the bill without losing support from their base. That means a right-to-work bill’s fate could ultimately be determined by Walker. Robinson said the governor’s decision in such a scenario would have big implications for his presidential ambitions.

“Can he really win a Republican nomination for president if he shoots down right-to-work in his own state? I don’t think so,” he said. “I think he has to sign it if it ends up on his desk.”

Walker has never vowed to veto a potential right-to-work bill. Walker also sponsored such legislation when he served in the state Assembly in the 1990s.

Indian Country News editor Paul DeMain, who unlike Robinson opposes right-to-work laws, weighed in on the matter on Friday, saying that Republicans are trying to destroy what’s left of labor unions in Wisconsin.

“It’ll be interesting to see if they move to eliminate collective bargaining for the rest of public employees — because either unions are good or unions are bad,” said DeMain.

Editor’s note: “The Week in Review” can be heard each Friday at 8 a.m. on the Ideas Network of Wisconsin Public Radio.