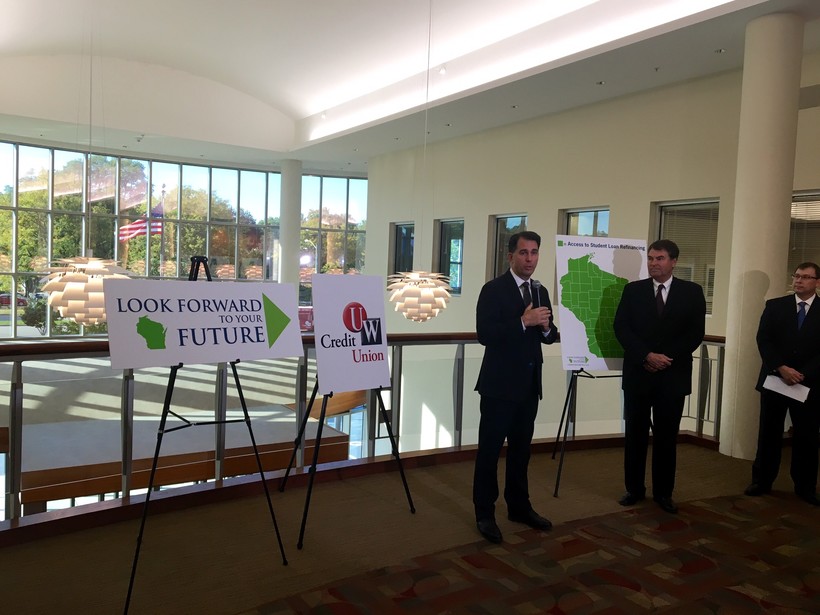 The UW Credit Union, which has branch locations across the state, will now provide student loan refinancing and consolidation services to all Wisconsin residents, not just current and former UW System students.

The governor appeared at the UW Credit Union's headquarters in Madison to announce the credit union's expanded eligibility for student loan consolidation and refinancing, calling it a private sector solution to growing student loan debt.

"Really, this offers a tremendous opportunity for students not only to get student loan financing, but particularly for those looking to consolidate or refinance that," Walker said.

The UW Credit Union Board of Directors approved the membership eligibility changes earlier this summer.

"We discussed with (Walker administration) officials and other (Governor's Council on Financial Literacy) members about the need for consumer-friendly student loan refinance options and felt we could be of great help by expanding eligibility of our services to more Wisconsin residents," said Paul Kundert, president and CEO of the credit union, in a prepared statement.

"(The governor's) proposal of simply business as usual and going in and relying on banks to provide you some kind of great interest rate when you have no collateral is laughable," Ross said. "It's as offensive as it is useless."

State Democratic Party Chair Martha Laning also spoke against the initiative Tuesday, calling the initiative a "promotion of big banks" rather than a "real plan."

"It's time for Wisconsin lawmakers to put the future of the next generation before their greedy special interest pals who inappropriately make money on the backs of Wisconsinites," Laning said in a prepared statement.

Wisconsin Democrats have called for a state-run authority offering student loan refinancing. The governor and fellow Republicans oppose that.

Walker reaffirmed his opposition Tuesday, calling the proposal "another layer of government."