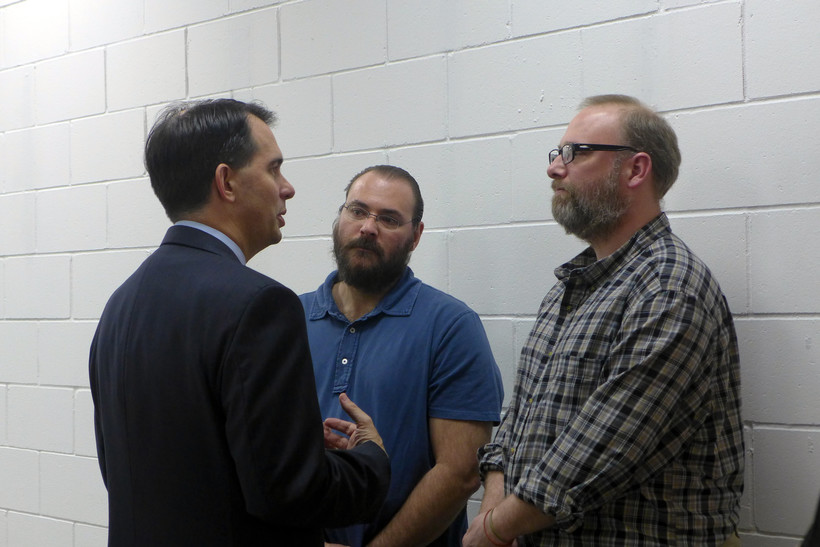 Gov. Scott Walker speaks with Ron Tilson, left, and Shawn Mattson, both of whom were hired by Empire Screen Printing in Onalaska though the FSET program.

Some Question The Program's Impact On Those In Need
By Hope Kirwan
Share:

During a stop near La Crosse, Walker said $60 million from the past two budgets has been allocated to the FoodShare Employment and Training program, which provides jobs skills and experience to people enrolled in Wisconsin's food benefits program. Since April 2015, many adults who receive FoodShare benefits are required to work 80 hours a month or participate in worker training.

"We will take care of our neighbors and fellow citizens, but for those who are able to work, we expect something in return," Walker said.

According to new FSET data this week by the Wisconsin Department of Health Services, 32,193 people food stamp recipients enrolled in the program since April 2015 and 11,971 participants gained employment in the past year.

Sherrie Tussler, executive director of the Hunger Task Force in Milwaukee, said that doesn't mean the training has been a success.

"It has been a complete failure," Tussler said.

Tussler said providing worker training to FoodShare recipients is a good idea, but she doesn't think the current system is helping lift people out of poverty. She said the FSET program in Milwaukee tends to send people to part-time, minimum wage jobs, which means many of the 11,000 people who gained employment through FSET may still be on food stamps.

However, some Wisconsinites have been able to gain employment through the FSET program. Shawn Mattson completed the training and is now employed at Empire Screen Printing near La Crosse. He said he wasn't a fan of the new work requirements at first.

"I always don't like being told what to do," he said. "But I do get the free benefits, so why not? And as it turned out, it was a great opportunity."

Mattson said he worked at Empire Screen Printing for 3 months without pay during a resume building program, and was then hired to work full-time for the company. He said FSET lead to a better job than the ones he was applying for before enrolling in the program.

"This was a better pay opportunity. And certainly the work environment here, it's a lot more interesting than working in a kitchen," Mattson said.

Tussler said there are many reasons why people might not have been able to meet the new work requirements.

"They don't read write or speak English, they may be people who fall through the cracks because they have disabilities, they may have transportation problems," Tussler said. "But one of the most important reasons here in Milwaukee is there just aren't enough jobs for everybody looking for one."

The DHS says FSET does provide translation services and transportation assistance for participants. A department representative also pointed out that FoodShare recipients who have a physical or mental disability are exempt from work requirements, and that participation in FSET is enough to meet the work requirements for eligible individuals.

Correction: An earlier version of this story featured a quote from Sherrie Tussler that included an incorrect statistic about the job placement rate for the Foodshare Employment and Training program. That quote has been removed.

Editor's Note: This story has been updated with a statement from the DHS.