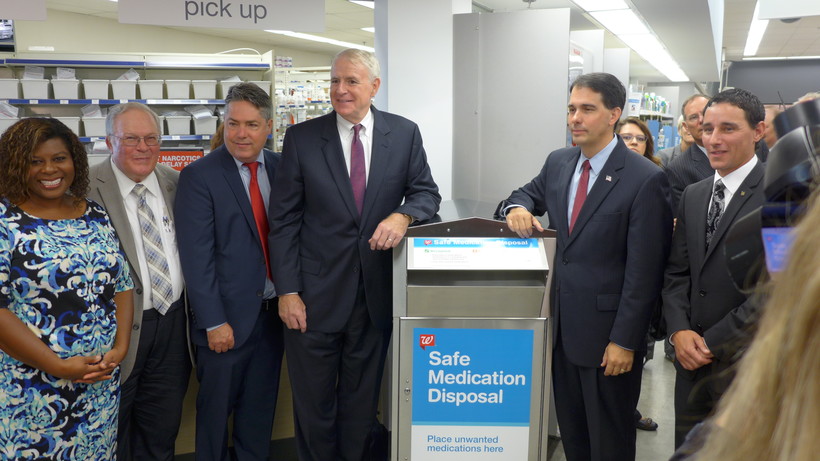 Walker And Other State Officials Discussed Efforts To Combat Opioid Epidemic
By Ross Terrell and The Associated Press
Share:

Walker signed the order at a Walgreens drug store in Milwaukee to highlight the chain's drug take-back disposal program at 18 pharmacies in Wisconsin. Citizens can drop off unused medication, including controlled substances by placing them in a disposal kiosk. Other drop boxes are located at local law enforcement offices. There are more than 250 drop box locations.

Walker said using drop boxes at Walgreens can put people at ease instead of having to go to local law enforcement offices.

"Nobody's asking a question. When you come to this site, there's no questions, there's no hassle. It's easy," Walker said. "Whether you're picking up a prescription, nobody has to wait in line. There's the pickup here but they can go right here and I hope others do the same."

Attorney General Brad Schimel said the state is working to improve the convenience of using drop boxes by having them at pharmacies where people pick up their medication.

"We're all recognizing the critical importance of getting unused prescriptions out of people's homes," Schimel said. "They are leading to addiction and death and a lot of suffering."

Schimel said properly disposing of unused medications can save lives.

The locations currently do not accept illegal drugs, but Schimel said that is something the state is working on. He said they're also looking to increase take-back locations in rural communities.

Milwaukee Mayor Tom Barrett said the opioid epidemic is a public health crisis that can only be curbed through state and private sector collaboration.

"If you look at the recent past, the number of deaths that have occurred as a result of opioid or heroin overdose, it surpasses the amount of deaths we have for homicides, unsafe sleeping conditions and car accidents combined," Barrett said.

Walker said the task force will be led by Lt. Gov. Rebecca Kleefisch and Rep. John Nygren, R-Marinette, whose daughter has struggled with drug abuse.