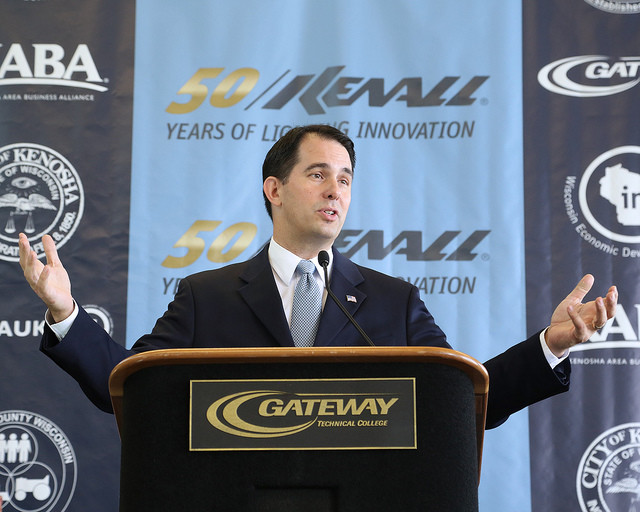 Burke Pounces On Walker's Comments From Meeting With Journal Sentinel Editorial Board
By Shawn Johnson
Share:

Gov. Scott Walker said on Tuesday that the state minimum wage “serves no purpose,” though he said he won't repeal it as governor.

During last week’s gubernatorial debate, Walker and Democratic challenger Mary Burke were asked whether they thought the current minimum wage of $7.25 an hour was enough for someone to live on. Burke's answer was straightforward: “I don't think that our minimum wage is enough for folks to live on,” she said.

Walker, however, did not answer directly, saying that he was focused on helping create jobs that pay more than the minimum.

“The way you do that is not by an arbitrary limit by the state,” he said.

Walker was pressed about those comments on Tuesday in a meeting with the editorial board of the Milwaukee Journal-Sentinel.

“I'm not going to repeal it, but I don't think it serves a purpose because we're debating then what the lowest levels are at,” Walker told the editorial board. “I want people to make, like I said the other night, two or three times that.”

Burke pounced on the governor's contention that the minimum wage serves no purpose.

“I disagree with it entirely,” Burke said. “It's important that people who are working full-time are able to support themselves without government assistance. That's just sort of common sense.”

Burke favors raising the minimum wage to $10.10 an hour, the same level that President Barack Obama has advocated for.