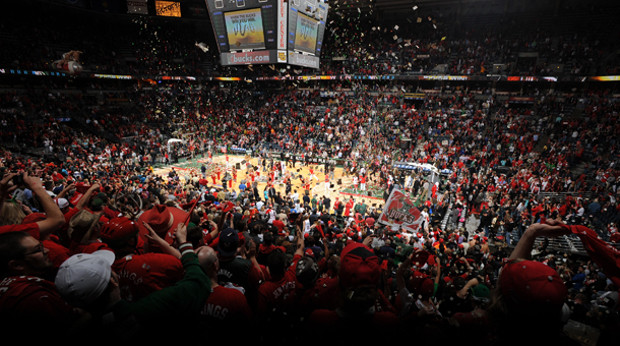 Analyst: WEDC Loans Are One Possibility
By Bill Martens
Share:

Gov. Scott Walker said that state government might be able to assist the Milwaukee Bucks with its arena issues and help keep the pro basketball franchise in the city.

“In terms of what can the state do long-term, you know, that’s wide open,” Walker said Tuesday on WSSP-AM, a Milwaukee sports radio station.

Walker’s comments came after Bucks owner and former U.S. Sen. Herb Kohl announced that he was seeking a group of investors to buy the franchise and who are committed to keeping the team in Milwaukee. Kohl said that a new arena to replace the 25-year-old BMO Harris Bradley Center is critical in making sure the Bucks stay put long-term.  The team’s lease at the facility runs out in 2017.

Kohl also said that he would likely contribute to a new downtown arena that’s expected to cost hundreds of millions of dollars.

Don Walker, who writes “The Business of Sports” blog for the Milwaukee Journal Sentinel, said that the Wisconsin Economic Development Corporation might help as well by selling bonds to raise public money.  However, he added that such an approach will not sit well with everyone.

“There would likely be public opposition to that,” said Don Walker.  “Certainly, there are many needs in the state when it comes to infrastructure and many people might reasonably think that a sports arena in Milwaukee would not qualify.”

Gov. Walker also told WSSP Radio that the state in recent years has helped pay for maintenance costs to the BMO Harris Bradley Center, which he said has also bought the team time to figure out what to do next.

As for the potential return on any public investment in a new arena, Don Walker said that the vast majority of sports economists believe that a professional sports team doesn't necessarily contribute to the economic well-being of a region. However, he said he thinks a sports team certainly brings a community together.

If the Bucks leave Milwaukee -- perhaps for Seattle as many observers speculate may happen -- Don Walker said that is likely to spell trouble for the governor.

“It’s important to remember that no governor, no mayor, no county executive ever wants to be serving in office when a professional sports team leaves its city,” said Don Walker.  “(Gov. Walker) certainly must have that in the back of his mind.  If he were to run again next year and prevail as governor, on his watch having the Bucks be in some form of public distress and possibly leaving the city is not a good thing for any politician.”

Gov. Walker seemed to acknowledge that he has thought about that possibility.

“It’s one thing if you don’t have a team, but if you have a team and somehow the team leaves, there’s something that goes far beyond sports to even what it says about a community, what it says to the business community and others out there,” said Walker on WSSP Radio.  “I think that’s why it’s important we find a way to make this work.”