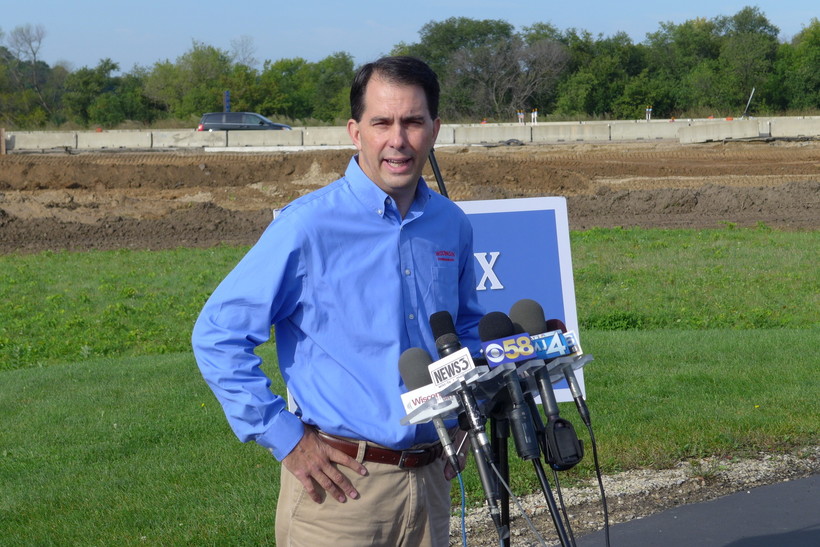 Walker Says He's Not Currently Raising Money For Outside Groups

Vos Sends Letter To Attorney General Asking For Investigation Into Who Released John Doe Documents To The Guardian
By Shawn Johnson
Share:

Gov. Scott Walker told reporters Thursday that documents showing he personally helped the Wisconsin Club for Growth raise money in 2011 and 2012 were "old news" even as he sidestepped questions about whether he'd work with the group again in the future.

Leaked documents published Wednesday by the British news organization The Guardian showed Walker was actively involved in fundraising for the Wisconsin Club for Growth, which ran ads supporting Walker and other Republicans in their recall elections. Groups like the Wisconsin Club for Growth can raise unlimited funds and keep their donations secret. The documents show Walker met personally with donors, mentioning in one email that he "got $1 million from John Menard" who runs the Menards home improvement chain.

Conservatives on the Wisconsin Supreme Court ruled last year such coordination is legal in Wisconsin and shut down the investigation known as John Doe 2. Walker referred to that decision when asked about The Guardian article by reporters at a stop in Edgerton.

But even as Walker said the law was on his side in this case, he would not answer directly when asked at the morning press event whether he was still raising money for third-party groups.

"Right now, what I'm focused in on is finishing off the last little bit of my presidential campaign (debt) … which will be done by the end of the year, and then next year getting ready to raise funds for Friends of Scott Walker in preparation for a reelection campaign in 2018," Walker said.

Wednesday's documents also showed for the first time that the owner of a company that once made lead paint gave $750,000 to the Wisconsin Club for Growth right around the time Walker and GOP lawmakers rewrote the law to shield businesses from lead paint lawsuits. Walker downplayed that news, saying the changes he endorsed were years in the making.

"For decades, I've talked about tort reform and the need to take on frivolous and out of control lawsuits," Walker said. "Nobody should be shocked that I did what I did."

Walker signed one of the changes into law in 2011 as part of a special session he called on his first day in office. The second change came with much less fanfare in 2013 when Republicans tucked a provision into the budget shielding businesses from lead paint lawsuits retroactively.

The documents published Wednesday were supposed to have been kept secret. They were ordered to remain under seal, first by the John Doe judge who oversaw this investigation and later by the Wisconsin Supreme Court.  Assembly Speaker Robin Vos sent a letter to Wisconsin Attorney General Brad Schimel asking him to investigate who violated that order.

"We believe this potential crime is of statewide nature, importance, and influence, and within your power to investigate," wrote Vos in a letter co-signed by Assembly Majority Leader Jim Steineke and Joint Finance Committee Co-Chair John Nygren.

"John Doe materials are secret materials," read the statement from Chisholm's office. "The public release of this John Doe evidence without court authorization is not merely a violation of the John Doe secrecy order; it is a crime under Wisconsin law."

Chisholm is one of the prosecutors currently pursuing an appeal of the John Doe ruling with the U.S. Supreme Court.  Prosecutors contend that the Wisconsin Supreme Court misread federal campaign finance law when it cleared the way for near unfettered coordination between candidates and interest groups. They also contend Justices David Prosser and Michael Gableman should have recused themselves from the John Doe rulings since they were helped in their supreme court campaigns by some of the very groups under investigation in this case.

Editor's note: This story has been updated with additional reporting from WPR.