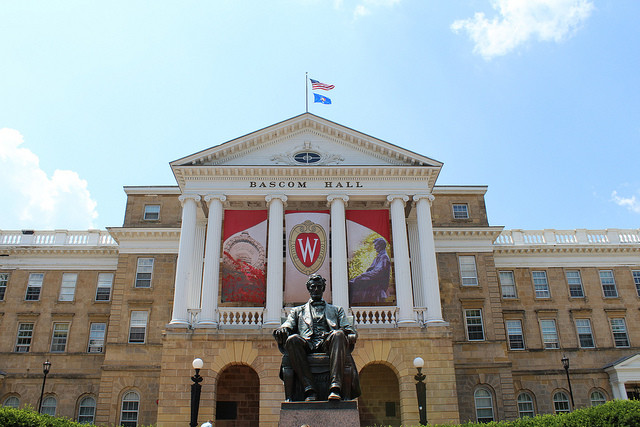 Gov. Scott Walker is proposing a 13-percent cut in state funding for the University of Wisconsin System at the same time that he wants to give all campuses more freedom from state laws.

Walker told The Associated Press in an exclusive interview that he will be proposing that future funding to UW be a block grant funded by sales tax revenue and adjusted annually for inflation.

The Madison campus will remain a part of the system, but all 26 campuses will have more autonomy from the state.

Walker was to include the plan as part of his two-year state budget proposal next week.

Speaking in Milwaukee Tuesday, Walker defended the proposal, comparing it to the Act 10 law a few years ago that changed the financial picture for local governments and school districts.

“Act 10, for example freed up money. They were able to bid out for health insurance, they were able to change overtime abuses, they were able to make a whole series of reductions with an authority,” Walker said. “We give them absolute authority and responsibility over their budget which makes them more flexible and more accountable at the same time.”

Lawmakers from both parties greeted the idea with considerable skepticism. Whitewater-area Republican state Sen. Steve Nass said it relinquished too much state oversight, and would make college much more expensive in just a few years.

“My big concern is that when the tuition freeze goes off, the Board of Regents — a board that's not elected, that meets once a month — will be in freewheel to raise tuition to what they believe they need to continue on.” said Nass.

“This is going to translate into losing the best and the brightest professors, and it's going to mean that those professors are going to take their grant money that they're getting from the federal government and move to another state.” Vinehout said.

UW Board of Regents President Michael Falbo said the proposed tuition freeze would make things challenging for the university system but was positive in his long-term outlook.

“Up front it’s a very difficult transition and certainly the budget cut makes it much more difficult. But we’re convinced, I’m convinced … that this is an opportunity that we need to embrace and take advantage of.”

But UW-Madison Chancellor Becky Blank was less sure. She said that, in the past when the university faced funding cuts, it could rely on tuition increases to offset the funding. Blank said Walker's current budget leaves the university without many options.

“Two years ago, I had some reserves, but they gave us a cut and said 'fill that with reserves.'  I now have very little left in my discretionary reserves, so this is going to make it really hard,” said Blank.

Blank said she hoped lawmakers would ultimately let UW raise tuition on out-of-state students. Walker's budget would also give the system more freedom to decide how to spend its own money, but Blank said that change by itself won't be enough to offset funding cuts.

Gary Miller, the chancellor of UW-Green Bay, said the proposed changes may hurt programs the school runs with community organizations.

“Generally that requires us to extend some resources or to provide time from faculty,” said Miller. “And you know in a situation where you really are removing a considerable amount of resources from your institution some of those could fall by the wayside.”

Miller said he's taking a “wait and see” approach to the cuts until he hears the governor’s full budget proposal. He wants more information on the part of Walker's proposal that would allow the System to have more autonomy.

The budget process is still in its early stages and the plan will receive input from both sides of state Legislature.

Editor's Note: WPR.org and Wisconsin Public Radio is a service of the University of Wisconsin-Extension and the Wisconsin Educational Communications Board.