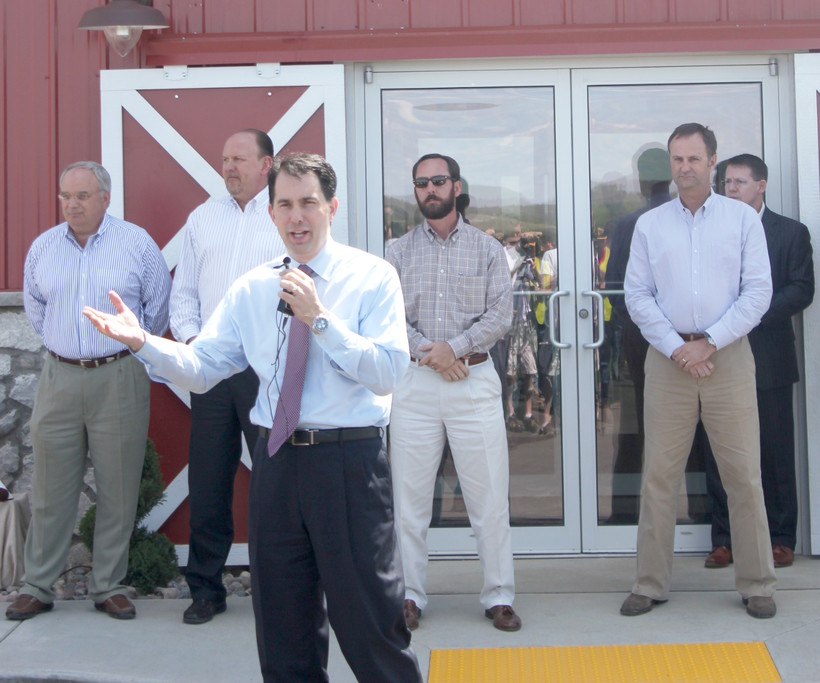 Walker Pays First-Ever Visit To A Frac Sand Mine

Gov. Scott Walker made his first visit to a frac sand mine Thursday afternoon near Whitehall, where he urged other companies to build more sites like it across western Wisconsin.

The governor spoke during an employee appreciation day at a brand new frac sand mine and processing center owned by Texas- based company Hi-Crush Proppants. It’s a huge facility with miles of covered conveyor belts, and will be capable of producing 3 million tons of finished sand when construction is finished next year.

Walker thanked the company for building their third frac sand operation in Wisconsin and urged them to build more.

“We’d love to help you put four, five, six and more out here, because we know thanks to god and the glaciers we got the best frac sand in the world – and it’s right here in the state of Wisconsin,” said Walker. “And we want to put more good people to work helping us harvest that and send it out.”

Hi-Crush anticipates hiring 80 full-time employees at the site and will contract with around 20 heavy equipment operators.

The sand mine wedged between the cities of Independence and Whitehall has been controversial because company officials convinced the cities to annex their property. This allowed them to begin mining, despite a temporary ban in Trempealeau County.

Walker says the actions were above board. “They did the process that was available to them under the law,” said Walker. “They didn’t do anything that wasn’t legally an option.”

Hi-Crush also made headlines when one of its mines was cited for installing high-capacity wells without required permits. Walker says what's more important is that the company answered for its mistakes and hasn't had any subsequent violations.