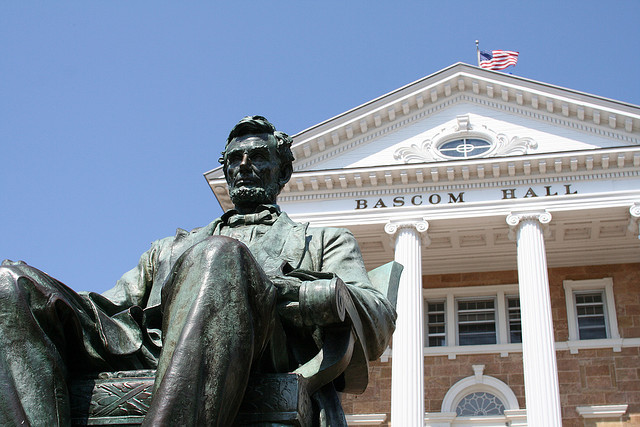 A statue of Abraham Lincoln outside Bascom Hall on the UW-Madison campus.

Public Service Mission Would Be Replaced With A Focus On Workforce Needs
By Shawn Johnson
Share:

The proposed change in the UW System's mission.

Update: It now appears that the governor does not intend to get rid of the Wisconsin Idea. According to an e-mail from Scott Walker's spokeswoman, the change in the University of Wisconsin mission statement was a “drafting error.” Read about the development here.

Gov. Scott Walker wants to remove the “Wisconsin Idea” from the University of Wisconsin’s mission statement, replacing a pledge to search for truth with a goal of developing the state's workforce.

Walker's budget would delete significant pieces of the UW's mission. Gone would be the goal to “extend knowledge and its application beyond the boundaries of its campuses.” No longer would the UW be charged with serving and stimulating society. Also gone would be the words, “Basic to every purpose of the system is the search for truth.”

Mary Bottari is with the Center for Media and Democracy, which first discovered the change. She said it goes to the heart of the Wisconsin Idea.

“This wasn't just a minor tweak. This was a sort of slash and burn of the entire notion,” said Bottari.

In its place, Walker would add just a few words, saying it's the UW’s mission “to meet the state's workforce needs.”

The governor's office had no immediate comment on why Walker made the changes.

Read more about what was included in Walker's executive budget here.