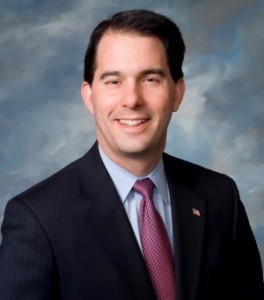 Walker Budget: 'More Freedom And Prosperity For All'

Governor Scott Walker unveiled his proposed state budget to the legislature last night, and with it the details of his proposed income tax cut.

Like other pieces of the Governor's budget, Walker framed the $343 million tax cut in terms of independence from government: "Bottom line, I want more freedom and prosperity for all."

Walker's budget would cut tax rates for the three lowest income brackets, which max out at about $215,000 for married couples. Because it cuts rates, people who make more than that would also benefit.

"This will ensure a tax cut for everyone, with a focus on making sure Wisconsin is more competitive for middle class taxpayers and small businesses."

But Senate Democratic Minority Leader Chris Larson says the Governor's tax cut does not reflect the middle class people he talks to around the state.

The administration says the tax cut would amount to about two-dollars a week for the average person. Larson said he thought the public would favor spending the money instead on schools, which saw their general state aid held largely flat.