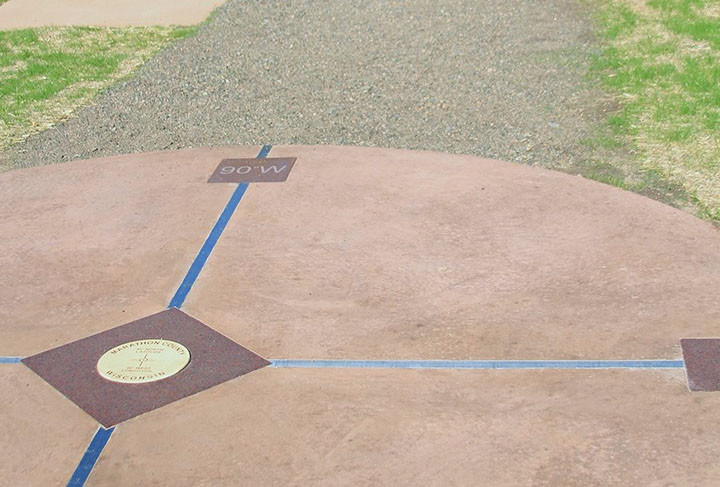 The marker in Marathon County that designates the north 45th parallel of latitude and the west 90th meridian of longitude. Courtesy of the Wausau/Central Wisconsin Convention & Visitors Bureau marketing director/photographer Kent Perrin

Visitors Drawn To 'Center Of The Northwestern World' In Marathon County

At the end of a crushed gravel pathway off a rural road in Marathon County sits a bronze marker flanked by corn fields and otherwise surrounded by woods.

That marker, about 21 miles west of Wausau, pinpoints the only easily accessible location in the world that is halfway between the Equator and the poles, a quarter of the way around the planet and halfway between the Greenwich Meridian and the International Date Line.

At the 45 degrees 0 minutes north latitude and 90 degrees 0 minutes west longitude, the "Center of the Northwestern World" is one of four hemispheric points like it, with two in the Indian and Pacific oceans and one in the remote Xinjiang Uighur Autonomous Region of China. The 45- and 90-degree points are shown in red. Photo: Courtesy of Marathon County.

"In Marathon County, we have the only accessible (45th latitude, 90th longitude) in the world that you can actually go out to and actually stand right on the spot if you want," said Richard Barrett, executive director of the Wausau Central Wisconsin Convention and Visitors Bureau.

Last year, Marathon County staff renovated the park after spending about nine months raising funds for it. The park, dubbed "the skinniest" in the state, Barrett said, is 20 feet wide and about a quarter-mile long.

Before the park was built, a sign about 1,100 feet from the actual location of the 45th latitude, 90th longitude point was marked with a sign, and apparently disappointed visitors who wanted to view the exact location. This marker at the site of the north 45th parallel of latitude, west 90th meridian of longitude near Wausau explains latitude and longitude. Photo: Courtesy of the Wausau/Central Wisconsin Convention & Visitors Bureau marketing director/photographer Kent Perrin.

Staff from Marathon County Surveying and the county's parks and highway departments were granted an easement from the landowners, allowing a path to be built that leads to a monument at the exact position.

Barrett said the county wanted to prepare the park in time for the first International Wisconsin Ginseng Festival last year.

Marathon County produces about 90 percent of the ginseng exported from the U.S., and Barrett said there's a Chinese belief that ginseng grows well in Marathon County because it hosts the 45th latitude, 90th longitude point.

"So, we said we've got to try to see if we can get something out there so people can actually visit it," he said.

Barrett said prior to the park being built, the location attracted 300 to 500 people a year, measured by the visitors bureau. Now, the park is seeing 12 times the number of visitors, and this month alone saw 1,000 people, Barrett said.

With the marker about 1,000 feet from the road, visitors have a chance to relax on benches nearby before making the walk back to their cars.

"You can rest on the way out to it and it's just kind of a neat little place now and it is just amazing how many people go out there," Barrett said.

Visitors to the park can become members of the "45 x 90 Club" by visiting the Wausau/Central Wisconsin Convention & Visitors Center in downtown Wausau to sign an official club book and receive a two-side token as proof of membership.